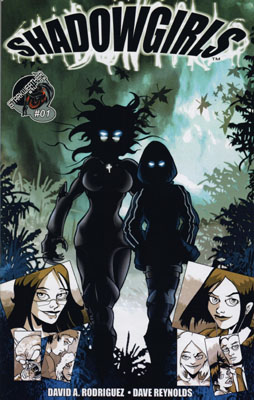 "H. P. Lovecraft meets Gilmore Girls" — Possibly with a dash of Buffy the Vampire Slayer in the mix.

Fifteen-year-old Charon McKay mysteriously disappears from the small coastal town of Innsmouth, Massachusetts and returns several months later, naked, delirious, and pregnant with no memory of anything that happened during the time she was missing. The mystery is considered solved when her post-return medical exam uncovers an operable brain tumor, but her best friend, Jackson Snow, is still sufficiently freaked out about it to ditch Charon for Rich Bitch Christmas "Chrissy" Banks, Charon's local tormentor and rival for Jack's affections. Seizing her opportunity, Chrissy seals her victory by using her family connections to permanently ruin Charon's reputation. After undergoing treatment for her tumor, Charon eventually gives birth to a daughter, Rebecka, who she endeavors to raise as best she can despite the situation.

Fast forward fifteen years. Charon is an (in)famous figure in Innsmouth society, but lavishes love and care on her daughter, who has turned out remarkably well considering the circumstances. However, a chance meeting with Jack (now married to Chrissy and with a daughter of his own) stokes old memories and rivalries between Chrissy and Charon, while Chrissy's daughter Misty is proving that she's her mother's daughter, albeit more devious. While Chrissy ambushing Charon outside a bar with a baseball bat and Misty setting Becka up for a fall at a local party may seem like dramatic antics, the bloody murder of Chrissy's posse by fish monsters and the monsters' own gory deaths thanks to Charon's triggered powers, at the same time as Becka's own powers trigger and draw more monsters to her, hint that all is not right with the world. Especially as the monsters repeat one theme over and over. "Shadowchild. Find. Shadowchild. KILL."

On the run from the police (thanks to Chrissy's post-traumatic blaming of Charon for the murders), mother and daughter must now confront the eldritch powers that are lurking in the shadows of Innsmouth, as an Ancient Conspiracy's plan just hit high gear and the duo are the only ones that have a chance in hell of stopping it.

Shadowgirls is a webcomic created by David Rodriguez and Dave Reynolds. Hitting every point from horror to action to comedy to Fanservice, Shadowgirls is a unique but excellent work. Sadly, it ended in 2011.

It has since been taken offline, to be sold in physical form.