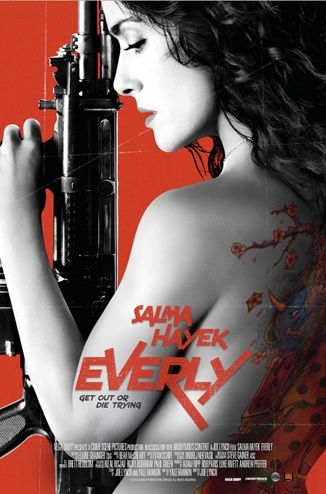 Everly is a 2014 Direct to Video action film directed by Joe Lynch and written by Yale Hannon. The film stars Salma Hayek as the title character, a woman who had been kidnapped and forced into prostitution four years before the start of the movie. She is now being attacked by her criminal overlord after he discovered that she was working with the police to bring down his organization, and he promises to also kill her mother and daughter. Nearly the entire film takes place in the single apartment where Everly has been held for years, as she fights off hitmen, torturers and other prostitutes as she struggles to survive until she can get her mother and daughter out of the situation alive.

The fights are brutal and blood-filled, with none of the fanservice to be expected from a film starring Salma Hayek or with a concept that can be described using the term "Prostitute hitwoman". As the story progresses hope dwindles from escape to just survival, and maybe not even that.