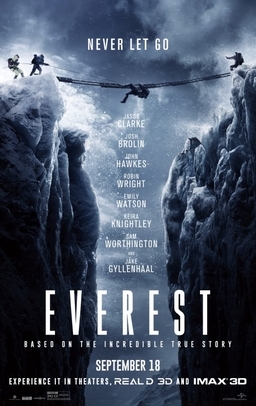 Never let go.
"Human beings simply aren't built to function at the cruising altitude of a 747. Our bodies will be literally dying. Everest is another beast altogether."
— Rob Hall
Advertisement:

As the spring season gets underway, a number of expeditions make their way to the base of Mount Everest to make attempts on the summit, most notably Rob Hall's Adventure Consultants and Scott Fischer's Mountain Madness teams. Over the next few weeks, the teams acclimatize to the conditions and each other and work their ways up to the peak. Among the expedition's clients this year are Beck Weathers, Doug Hansen, who hoping to be the first mailman on the mountain, and Yasuko Namba who has climbed six of the Seven Summits, with only Everest itself remaining.

On May 10, the teams finally reach the top of Everest, but the most dangerous part remains. As they descend, a large blizzard suddenly blows in, slamming into the side of the mountain, and trapping several climbers up there. Now with the teams scattered and help unable to reach them, the lost climbers must find a way to survive long enough for rescue.

Not to be confused with the IMAX film of the same name which is about the same events.

Tropes found on the mountain: