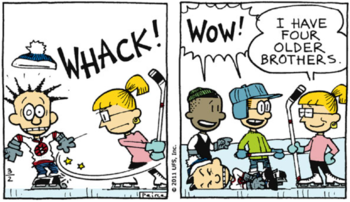 "You see, it's because of her mean older brothers that she is immune to all manners of toilet nastiness. It's really sort of a gift, like playing the violin. Or dancing. Or playing the violin and dancing while Isabella's brothers fart at you."
— Jamie Kelly, Dear Dumb Diary #8, "It's Not My Fault I Know Everything"
Advertisement:

The tendency to justify characters displaying characteristics such as personality traits or skills outside traditional gender norms as being the result of having a number of (usually older) siblings of the opposite gender. For example, masculine female characters like The Lad-ette or Tomboy referring to their male siblings as the explanation as to how they got to be the way they are, or a Passionate Sports Girl being taught the sport by her brothers. While the name is gender specific, this is a unisex trope and covers instances of male characters justifying their interest in, knowledge of, or skill at doing traditionally feminine things such as fashion or cooking, or generally being In Touch with His Feminine Side.

If a girl is tough because she grew up with brothers who bullied her or otherwise fought with her, this trope overlaps with Had to Be Sharp.

Alternative Title(s): I Have Sisters