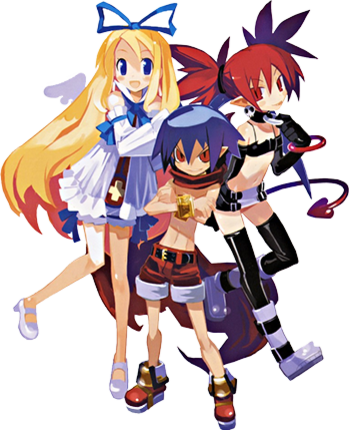 Even demons need a guardian angel.
Sarda: You are all evil monsters who need to die for the good of everybody else.
Black Mage: Wait, even Fighter?
Sarda: Except Fighter.
Fighter: Yay!
Sarda: He's a casualty.
Black Mage: [as Fighter pouts] Yay!
— 8-Bit Theater
Advertisement:

A Token Good Teammate is someone in The Team whose greater principles stick out like a sore thumb. A typical example might be a Justified Criminal forced to go native among real criminals, perhaps because of deliberate persecution or simple error by The Government. Or maybe they are horribly misguided and following this evil cause because they honestly believe it is good.

Despite their high moral standards, they need not be The Heart for the party, as they may not be interfering with their questionable activities. They can remind the others (or teach them for the first time) that there is more at stake than money, power or personal vendettas. Alternately, they may be someone who simply holds themself aloof from the "debauchery" of the rest of his team. In extreme examples, they may become hated by other characters as they try to foist their ideas on the others, becoming a terribly annoying Commander Contrarian.

They will likely have struggles between loyalty to their friends and their conscience, creating inner conflict and conflict with their teammates, but sometimes a Token Good Teammate can also inspire the team to rise above themselves by the idealism they show.

Alternatively, a Token Good Teammate can be found amongst a group of dastardly villains, in order for the show to make sure that the antagonist side does not go too black in terms of morality. Perhaps this character shows restraint in doing atrocious evil, or is forced against their own will to be a bad guy (due to a hostage or some other leverage held by the bad guys, for example), or has other goals that are noble, but require them to be on the bad guys' side, or is merely just following orders from the higher ups that they have sworn loyalty to (high honor standards can cause such). They may even be a horribly misguided Wide-Eyed Idealist who honestly believes the cause to be a good one. This character has a high chance to become a sympathetic character that the audience can root for, or perhaps even call it quits and jump ship to the good guys. They may also be the Team Face by virtue of not being an asshole. The other members will trust them more than each other and have this character talk to the muggles when needed. In more cynical works, expect the Token Good Teammate to be killed off by the Big Bad to show how ruthless they are.

Compare Token Evil Teammate, Token Wholesome and Hero Antagonist. Related to the Fish out of Water, the Only Sane Man, and The Heart. See also All-Loving Hero. For possible variations on the 'good guy amongst irredeemable villains', you could try the Sliding Scale of Anti-Villains.

Real Life? Suffice it to say that this is Truth in Television for even the vilest of causes, and leave it at that.