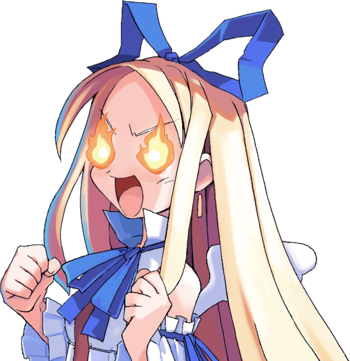 Don't make this angel angry... or really pumped about something.
"Guys, I think her eyeballs are literally turning into little flames here."
— Notte, Dragalia Lost
Advertisement:

Eyes filled with fire is a very strong image and a good way to convey that a character is demonic, possessed by demons, comically overreacting, really pissed off, very determined about something, or in just a really excited mood.

Don't really expect the fire to actually affect things, unless this crosses over with Heat Vision.

This could be the next step after Red Eyes, Take Warning, if you don't heed the warning.

Not to be confused with "Eyes of Flame".