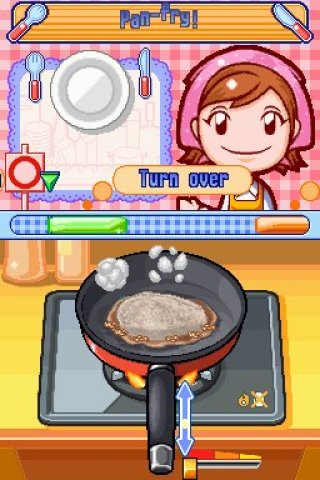 Cooking Mama is a game series by Office Create on Nintendo's systems in which you are a cook in the titular Mama's kitchen. She teaches you how to prepare a variety of dishes step by step, from preparing the raw meat, chopping vegetables, stirring, baking, frying, you name it. Each step takes the form of a mini-game. Your score for how well you complete each task, with bonus points if you do it before the time runs out. And at the end you see just how lovely your dish came out.

Depending on the system it's on, it makes very good use of the DS's touch screen or Wii Remote controls.

There are several games in this series:

Apart from all that, it appears that Taiwanese arcade games maker Universal Space has obtained the rights to create a Cooking Mama arcade game

to market only in the southeastern region of Asia. There is also Cooking Mama: Friends' Café

on Facebook, good for pestering your friends and Bribing Your Way to Victory. There are also the app games "Cooking Mama Let's Cook" and "Cooking Mama: Let's Cook Puzzle".