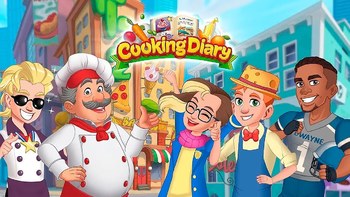 Cooking Diary is a Time Management Game by Mytona for Android and IOS platforms.

The game starts off with the player moving back to their hometown of Tasty Hill to become the owner of their grandfather's (who is a famous chef) restaurant. The player then proceeds to record all the events that happen in the restaurant as well as all of the new people they meet in their diary. There's also a subplot where the player and grandpa try to uncover the truth about a past incident that created a blemish in the former's reputation.