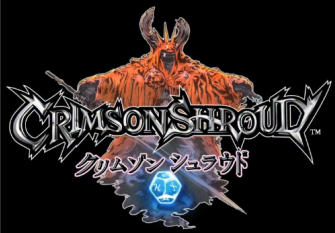 A lost treasure... A fool's fable, told in tales. A gift wrought by magic, in a world where magic never was. But is it blessing, or curse?
Advertisement:

Crimson Shroud is a 2012 Adventure Game influenced by tabletop role-playing games, with the simulated usage of dice to determine the strength or weakness of certain effects. Originally packaged in the Guild01 set in Japan, it was later released as a standalone Nintendo 3DS eShop title in US and Europe. It is directed by Yasumi Matsuno and developed by Level5. Its first trailer can be seen here.

It tells the story of Giauque, Frea and Lippa: a team of three experienced "Chasers" who hunt criminals and treasures alike in a Medieval European Fantasy world. Arriving at a long-lost ruin in search of a forbidden manuscript, the trio find themselves drawn into the legend of the Crimson Shroud, fabled to be the origin of all magic.