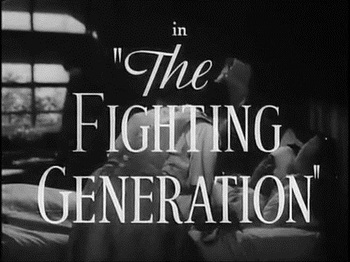 "He's asleep now. His name is Johnny. Private First Class, badly wounded on Saipan. As a nurse's aide, I see many cases like this."
— Nurse's Aide
Advertisement:

The Fighting Generation is a 1944 public service announcement short film produced for the U.S. Treasury Department and intended to encourage war bond sales, directed by an uncredited Alfred Hitchcock and starring Jennifer Jones as a nurse's aide.

The film can be watched (alongside another wartime PSA, A Message of Importance) on YouTube here.