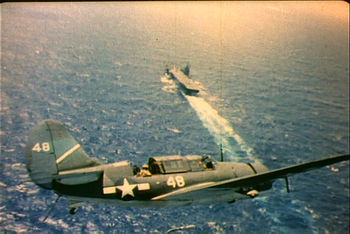 The Fighting Lady is a 1944 wartime documentary film produced by the United States Navy.

It is a propaganda film about a year in the life of a U.S. Navy aircraft carrier, which due to wartime censorship is only called "the Fighting Lady" onscreen, but is (mostly) actually USS Yorktown (CV-10). This Yorktown, the successor to the Yorktown (CV-5) that was sunk at Midway in 1942, receives a crew, passes through the Panama Canal and enters the combat zone of the Pacific. Much attention is paid to life aboard an aircraft carrier at sea, with the narration taking care to point out that it's not just about the pilots; the guys who cook the food and do the laundry are part of a fighting ship at sea too.

in June 1944. Planes from the "Lady" participate in this battle, an American victory so crushing that it was nicknamed the "Great Marianas Turkey Shoot". The film ends by pointing out which of the people seen onscreen were killed in combat.

The Fighting Lady was narrated by Robert Taylor, a Hollywood heartthrob who was also a Naval reservist and had been called up. It was directed by Edward Steichen and produced by William Wyler, with Alfred Newman writing the music.