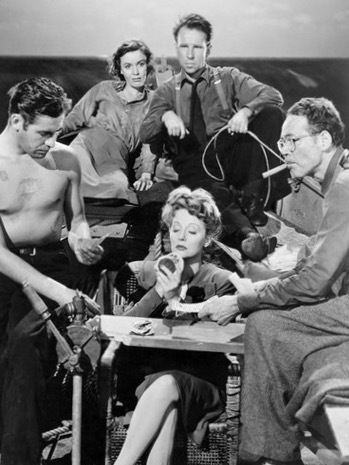 Lifeboat is a 1944 World War II drama film directed by Alfred Hitchcock, based on a story by John Steinbeck. It is notable for having all of its action confined to a single, claustrophobic setting: a small lifeboat adrift in the North Atlantic.

The film opens with the sinking of a passenger ship, depicted in the opening credits with a closeup of a smokestack as it descends and slips beneath the water. Shortly thereafter a lifeboat appears occupied by one passenger, an elegant, snooty newspaper columnist named Connie Porter (Tallulah Bankhead). Other survivors soon make their way onto the boat: Kovac (John Hodiak), Stanley (Hume Cronyn), Joe (Canada Lee), and Gus (William Bendix), four of the ship's crew; C.J. Rittenhouse (Henry Hull), a wealthy industrialist; Alice (Mary Anderson), a U.S. Army nurse; and Mrs. Higley (Heather Angel), a British war refugee. Finally, they pick up Willy (Walter Slezak), a German sailor from the U-boat that sank their ship—the U-boat, it turns out, also sank. Kovac wants to throw Willy back into the ocean, but the others prevail on him to do the honorable thing and keep the German aboard as a prisoner. The passengers aboard the lifeboat have to struggle to survive on the open ocean, while Willy plays them off each other in an effort to gain control.

Released in the middle of the war, Lifeboat took a lot of criticism at the time for making its German villain a strong and intelligent character. It bombed at the box office but still got Alfred Hitchcock an Academy Award nomination for Best Director (he didn't win).

Later got a sci-fi remake as the 1993 Made-for-TV Movie Lifepod.