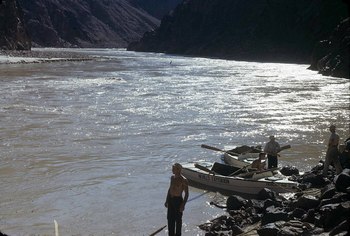 It is an account of a river-rafting expedition down the Colorado River led by veteran river man Norman Nevills. Nevills and his crew went on an expedition on the Colorado from Lee's Ferry all the way to Lake Mead and Hoover Dam. The film opens with footage of Nevills and his men crafting their boats. After loading up their rowboats with food kept in watertight containers, the men go on the perilous journey of the Colorado through Arizona. They manage to make it through 233 river rapids, while on the way observing the deer and the fish of the river, as well as the cliff side dwellings of the Pueblo Native Americans.

Edwin Olsen was an amateur cameraman shooting on 16mm film. After the completion of the expedition, he sold the film to Warner Brothers, which cut the footage into a short film for its Sports Parade series of shorts. The river rapids shown in the film were destroyed by the construction of the Glen Canyon Dam in the 1960s.