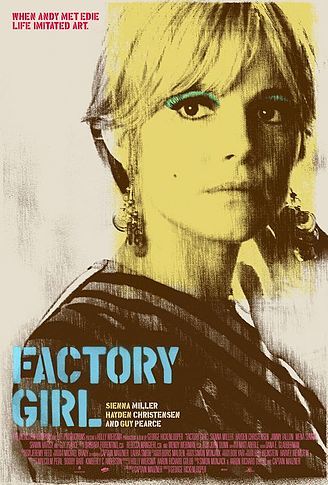 Factory Girl is a 2006 American film directed by George Hickenlooper, based on the rapid rise and fall of 1960s underground film star and socialite, Edie Sedgwick.

Edie Sedgwick (Sienna Miller) is a young heiress studying art in Cambridge, Massachusetts. She moves to New York City, where she is introduced to pop art painter and film-maker Andy Warhol (Guy Pearce). Intrigued by the beautiful socialite, he asks her to perform for him. Soon she is spending time with him at the Factory, his studio and also the hangout of a group of eccentrics, some of them drug addicts. Her status as Warhol superstar and success as a fashion model earn her popularity and international attention, but soon, fame starts to take its toll on her.