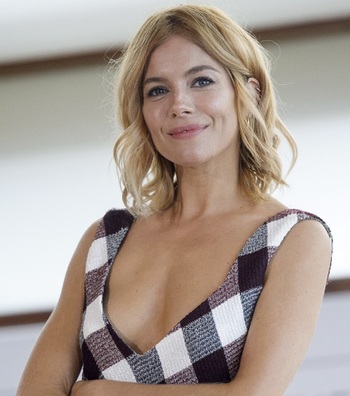 Her career began in the 2000s, with supporting roles in various British comedies, and the short lived police series Keen Eddie. Notable roles in Layer Cake and Alfie brought her to prominence, along with her well-publicised relationship with Jude Law. She quickly became tabloid fodder and earned a reputation as a Ms. Fanservice wild child, especially when the relationship ended with infidelity on his part and her next was with married actor Balthazar Getty. This scandalous public image tended to eclipse her screen work, despite getting good critical reviews; her roles in Stardust (as an Alpha Bitch pitting two men against each other) and in G.I. Joe: The Rise of Cobra (as The Baroness) were almost Leaning on the Fourth Wall.

She ended up taking a break for a couple of years to get away from the tabloids' obsession, honing her craft on the London stage and Broadway. In The New '10s, she of course returned to the big screen, now enjoying newer freedom to play more varied parts - including getting to play Tippi Hedren in HBO's The Girl. In the middle of the decade, based on her roles in Foxcatcher and American Sniper, it became something of an internet joke that playing Sienna Miller's husband in a biopic was a death sentence.

As usual, The Other Wiki has more details.