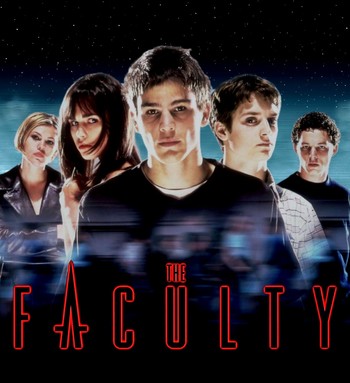 "If you were going to Take Over the World, would you blow up the White House Independence Day-style, or sneak in through the back door?"
— Casey
Advertisement:

The Faculty is a 1998 teen Horror film directed by Robert Rodriguez, his first in which he only served as director and not a writer. The story involves a parasitic alien landing in small-town Ohio and turning the faculty of a High School into its puppets, followed by the students and the rest of the town.

Among the rare successful horror comedies (especially out of the bunch that followed in Scream's wake), both very funny and very scary. The film's writer, Kevin Williamson, also wrote the first two Scream movies, which helped it to avoid making the mistakes of many of the copycat teen horror movies of the late '90s. Expect loads of creative gore and really creative casting.