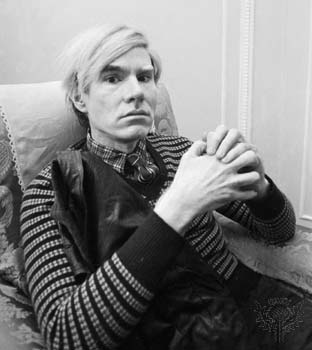 "Don't pay any attention to what they write about you. Just measure it in inches."
"In the future, everyone will be world-famous for 15 minutes."
— Andy Warhol
Advertisement:

Born Andrew Warhola, Jr. in Pittsburgh to Rusynnote Not a typo. The Rusyns

are a people of the Carpathian region who speak an East Slavic language closely related to Ukrainian, and were once considered to be more or less the same as Ukrainians, but through the passage of time have ended up closer in culture to Poles through a combination of Polish and then Austro-Hungarian (as opposed to Russian) domination and their predominantly Catholic religion.-American parents, Andy Warhol was a sickly child and often hospitalized. He developed a phobia of hospitals and was pathologically shy. Interested in drawing, he had a lot of time to practice. He went to art school and moved to New York. He started in commercial art illustration, but radically changed his style. Andy became famous for his hyper-saturated representations of everyday items, adhering to the concept that the everyday is beautiful. Famous pieces include Campbell's Soup Cans, Marilyn Diptych and Elvis.

Things changed when Valerie Solanas shot Warhol. Warhol survived the shooting but the event had a permanent effect on his life and work. He said of the shooting,

"Before I was shot, I always thought that I was more half-there than all-there — I always suspected that I was watching TV instead of living life. People sometimes say that the way things happen in movies is unreal, but actually it's the way things happen in life that's unreal. The movies make emotions look so strong and real, whereas when things really do happen to you, it's like watching television — you don't feel anything. Right when I was being shot and ever since, I knew that I was watching television. The channels switch, but it's all television."
Advertisement:

After that, The Factory was finished. In the 70's, Warhol did portraits commissioned by Michael Jackson, Liza Minnelli, and John Lennon among others. In the 80's Warhol collaborated with younger artists and began exploring the artistic possibilities of computers, even endorsing the Commodore Amiga. He died in 1987, after delaying a check up on a gallbladder issue due to his phobia of hospitals.

Warhol is also the Trope Namer for 15 Minutes of Fame.

(Note that many of his works have the property of being Exactly What It Says on the Tin, so there's no need to Pot Hole that trope in this section.)

Paul Morrissey wrote and directed two films, produced by Warhol (some claim that Warhol's involvement only amounted to allowing his name to be used):

Works about Warhol include:

Works where Andy Warhol appears as a character include:

"In the future, these tropes will be famous for 15 minutes":