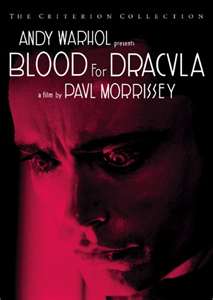 Blood For Dracula is a 1974 horror movie that was filmed alongside its companion piece Flesh for Frankenstein, which was released a year earlier. Both films were written and directed by Paul Morrissey, a frequent collaborator of Andy Warhol; Warhol allowed his name to be attached to their alternate titles but otherwise had nothing to do with them. The films also starred Joe Dallesandro, another Warhol collaborator, and Udo Kier. Both films dealt with themes of sexuality, classism, and immortality in a tongue-in-cheek manner, using classic horror figures of the 19th century. In this case, Dracula.

Dracula, played by Kier, is dying. He clings to life and needs blood in order to survive. The only problem is, in this version, vampires must feed on the blood of virgins in order to live. His assistant suggests that the Count move to Italy where, due to the strict religious culture, there should be plenty of virgins to choose from. They pack up their belongings and move in next door to a family with four daughters, three of them ready for marriage and claiming to be virgins. The Count befriends their parents and promises to marry one of the girls but soon finds out that not all the girls are as pure as they say they are. It seems that Mario the Socialist farmhand has been sleeping with two of them in secret. With the fourth daughter having been previously married and (presumably?) not a virgin, Dracula sets his sights on the youngest of the girls with Mario quickly unraveling the mystery.