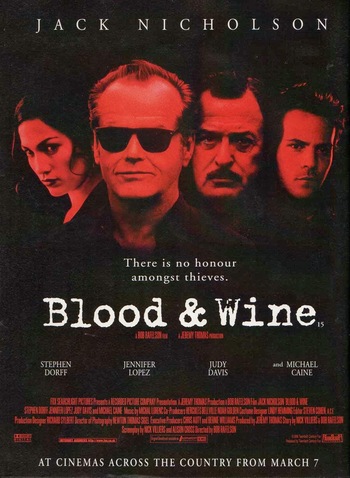 Blood and Wine is a 1996 neo-noir thriller directed by Bob Rafelson from a screenplay written by Nick Villiers and Alison Cross.

Alex Gates (Jack Nicholson) is a wine merchant living in Miami who has distanced himself from his alcoholic wife Suzanne (Judy Davis) and stepson Jason (Stephen Dorff). Heavily in debt, Alex concocts a plan to steal a valuable diamond necklace from the house of one of his clients, where his Cuban mistress Gabriela (Jennifer Lopez) works, with the help of safe-cracker Victor (Michael Caine). But the plan doesn't go smoothly, not at all helped by Jason becoming attracted to Gabriela, unaware of her relationship with Alex.