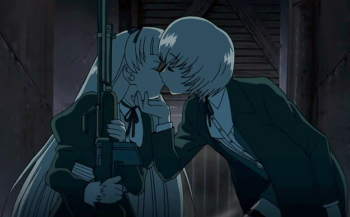 Yes, they're twins. This is one of their less disturbing aspects.
"We like our villains like we like our Book of Genesis: with implied incestuous relationships."
— Cracked
Advertisement:

So you have a character who is a villain. He's kicked puppies, tortured defenseless kittens, and done a bunch of other stuff to demonstrate his villainy. What else can you do to show the audience that he is evil in every way?

You have him break sexual taboos and engage in certain "taboo" or borderline activities which are frowned upon by many cultures. Sure, Even Bad Men Love Their Mamas, but some bad men love their mamas a little too much, and this can be meant to add to the audience's view of the villain as depraved and committing evil and "unnatural" acts daily.

This exploits a specific primal instinct-based sex taboo and is specifically based on the equating of breaking taboos with evil. When defied, this is presented as Even Evil Has Standards. The latter can and does come across not as a mere Values Dissonance, but as outright Hypocrisy, resulting in a Broken Aesop. Many cultures have world/humanity Creation Myths involving divine incest (and human incest, if the myth involves a few early humans giving rise to all of humanity), highlighting a moral dissonance between the primal and the religious.

Compare/contrast Brother–Sister Incest, Twincest, Parental Incest, Kissing Cousins, and Oedipus Complex. If it's one-sided on the villain's part, it overlaps with Incest-ant Admirer. If the child themselves is the abuser, they will be an Abusive Offspring. Can cross over with Freudian Excuse if it's implied to be rooted in child abuse. It may be part of a Rape as Backstory scenario, either for the villain themself, or whichever relative(s) were involved. If children result, expect them to be Inbred and Evil.

Though in the sequel, Elizabeth's ghost is trying to have sex with John's baby (her grandson), and Lupa is both Squicked and confused by how casually it's portrayed.