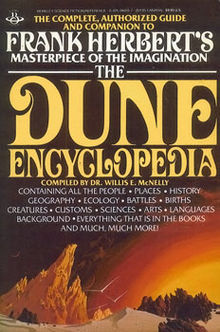 Religion must remain an outlet for people who say to themselves, 'I am not the kind of person I want to be.' It must never sink into an assemblage of the self-satisfied.
— The Dune Encyclopedia
Advertisement:

The Dune Encyclopedia is a collection of articles written by multiple authors and compiled/edited by Dr. Willis E. McNelly. McNelly, a close friend of original Dune author Frank Herbert, consulted with him throughout the process and was given access to early versions of God-Emperor of Dune in order to further inform the work. The Dune Encyclopedia was published in 1984 by Berkley Books, an imprint of Putnam, which published the original Dune Chronicles.

The Dune Encyclopedia is written in-universe after the reign of Leto II, based on the work of fictional in-universe archeologist Hadi Benotto. The encyclopedia also references the scholarly work of Bronso of Ix, a historian executed at the beginning of Dune Messiah, especially in the article for Dr. Yueh. McNelly uses this in-universe perspective as a pre-emptive explanation as to why information may become inaccurate or dated, since the accuracy of Hadi's source material may be propaganda or otherwise unreliable and subject to historical interpretation.

The Dune Encyclopedia gives a rich background to the Dune universe. It included detailed language guides, including Galach and Fremen. It includes detailed character biographies of both main and minor characters; technical articles such as the workings of the Ixian no-rooms and Holtzmann effects; histories of the Great Houses and major schools of the Imperium and historical events such as the Butlerian Jihad. It explores scientific aspects, including the Spice cycle and chemicals/poisons; historical details such as Sardaukar uniforms and awards and even in-universe literary study.

The Dune Encyclopedia contains examples of: