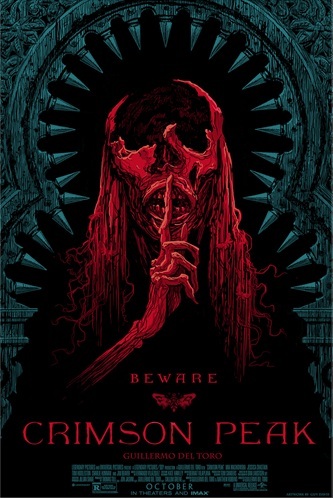 "Ghosts are real. That much I know. I've seen them all my life..."
— Edith Cushing
Advertisement:

Crimson Peak is another approach of Guillermo del Toro to ghost stories, released in October 2015. It is — in his own words — a classic gothic horror romance with a modern take. The film stars Mia Wasikowska, Tom Hiddleston, Jessica Chastain and Charlie Hunnam.

The year is 1901 and Edith Cushing (Mia Wasikowska) is a young writer with a troubled past, who marries Sir Thomas Sharpe (Tom Hiddleston) and moves to his mansion home, Allerdale Hall, in Cumbria where he resides with his sister Lady Lucille Sharpe (Jessica Chastain). But (par for the course with a del Toro film) Edith discovers that Sir Thomas is not what he appears to be...

The first official trailer can be watched here

. The second one is here

, and another variation of it here