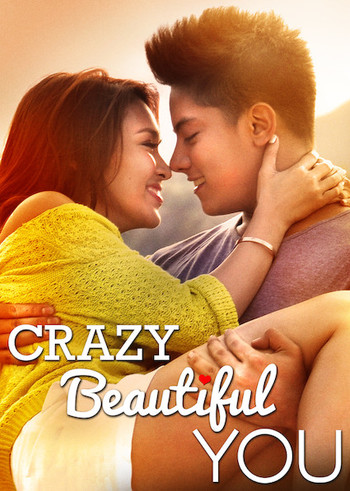 Crazy Beautiful You is a 2015 Philippine teen Romantic Comedy-Drama film starring Kathryn Bernardo and Daniel Padilla. It was released in cinemas across the Philippines on February 25, 2015. Another box-office triumph for the Bernardo-Padilla onscreen pairing, it grossed ₱320 million by the end of the first quarter of 2015. Its commercial success led to screenings in certain foreign territories, such as the United States and Canada; it is the second Philippine film in history to have breached the $2 million mark in terms of international box-office sales.

Jackie (Bernardo) is a Troubled, but Cute nineteen-year-old, much to the dismay of her estranged parents. Her only interest lies within photography, and she hopes that she can one day move to New York to study and escape her complicated life. One night, Jackie is thrown in jail after crashing her car while drag racing with some other teenagers. Finally fed up of Jackie's reckless antics, her father sends her off to spend time with her mother (Lorna Tolentino) on a medical mission camp in Tarlac.

She meets the lively Kiko (Padilla), who helps her retrieve her mobile phone from a thief. A few days later, Kiko takes Jackie to the medical mission in a remote mountain community where she has to learn how to adjust to the living conditions.

The film is globally available to stream on Netflix, with English subtitles.

Crazy Beautiful You provides examples of: