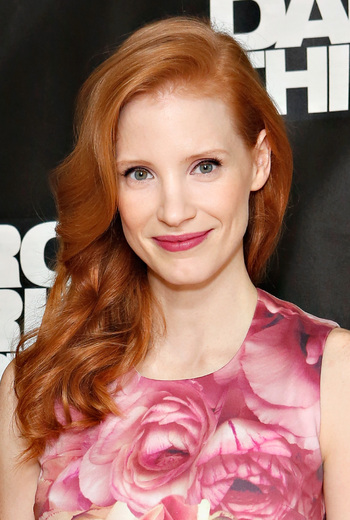 Jessica Michelle Chastain (born March 24, 1977 in Sacramento, California) is an American actress and film producer. She is best known for her roles as Maya in Zero Dark Thirty, Murph in Interstellar, Lucille in Crimson Peak and Commander Lewis in The Martian.

However, if you had asked who she was in 2010, cinephiles would have had no ready answer. If you asked the same question in 2012, the results would be very different. The intervening year saw no less than seven films featuring her, and transformed her into the personification of the breakout actress, and invited comparisons to both Kate Winslet and a young Meryl Streep among reviewers and filmgoers.

Previously, Chastain got to act thanks to a scholarship by the late Robin Williams at Julliard and had laboured for years in minor parts on television and in theatre, before working with Al Pacino in a stage performance of Oscar Wilde's Salome, where she played the title character. More roles followed, and due to a number of release delays, Chastain ended up having a very busy 2011 indeed, to the point where critics were split over which of her many performances was most deserving of recognition. The ultimate winner was The Help, the one that had made the most money, which earned her an Academy Award nomination for Best Supporting Actress. She netted her second Academy Award nomination the very next year, this time for Best Leading Actress for her starring role in Zero Dark Thirty. She finally won Best Leading Actress for The Eyes of Tammy Faye.

Don't worry if you confuse Bryce Dallas Howard with Jessica; it's not the first time, though both actresses

have established their differences.

She married Italian count Gian Luca Passi de Preposulo in 2017. They have two children together. She's also one of the army of co-owners of Angel City FC, a Los Angeles-based team set to start play in the National Women's Soccer League in 2022.

Jessica Chastain and her works provide examples of: