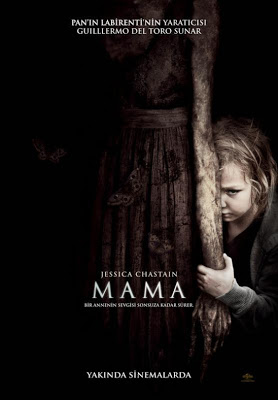 Mama is a 2013 horror film produced by Guillermo del Toro, and based on a Youtube short film

by Andrés Muschietti, who also directed it and helped produce and write it.

When little Victoria and Lily's father Jeffrey (Nikolaj Coster-Waldau) kills his business partner and his estranged wife, he flees with his daughters to parts unknown. They end up lost in the woods and find themselves in an abandoned cabin, where Jeffrey, at the end of his rope, attempts to do to the girls as he did to their mother. However, he's whisked away and killed by a blurry figure, and the three year-old Victoria and her one year-old sister are left to fend for themselves in the wilderness.

It's five years later, and their uncle Lucas (Nikolaj Coster-Waldau, again) has spent himself into bankruptcy trying to find any trace of his missing family, with only his girlfriend, Annabel (Jessica Chastain) —the bassist in a small-time rock band— for support. When a search party finds them somehow alive, regressed to a near-feral state, he fights tooth and nail to bring them home so they can begin the healing process. But after getting custody of them, it soon becomes clear that there was something taking care of them in the woods... and it won't let them go so easily.