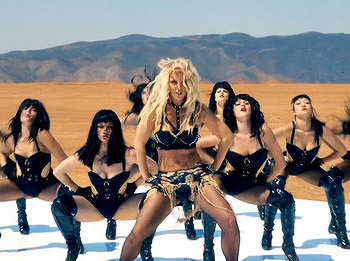 Oops, she did it again.
Advertisement:

A Music Video trope, frequently done with female solo artists, but also with dozens of male R&B/pop performers. It involves them dancing about in a skimpy/fanservicey outfit for the entirety (or vast majority) of the video. Seems to be a very Overdosed Trope as of 2010s (and there's no sign of receding) - to the point where it's often easier to name contemporary music videos that don't adhere to this trope.