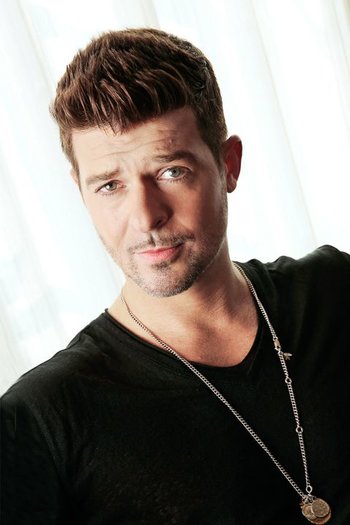 Robin Alan Thicke (born March 10, 1977) is an American-Canadian singer-songwriter, producer, and actor. He is the son of Canadian actor Alan Thicke and American singer and actress Gloria Loring.

He got his start in the music industry as a songwriter, working with the likes of Lil Wayne and Usher, among others. In 2002, he released his debut single, "When I Get You Alone", and a year later, his first album, A Beautiful World. Although it and his following albums were successful, he remained obscure.

Things changed in 2013, when he released "Blurred Lines", the lead single to his sixth album of the same name. The song became one of the best-selling singles in history, while its music video quickly went viral, admist considerable controversy for its content. This culminated in a (in)famous performance at the 2013 VMAs with Miley Cyrus.

I hate these blurred tropes!:

Everybody get up! (Woo!)