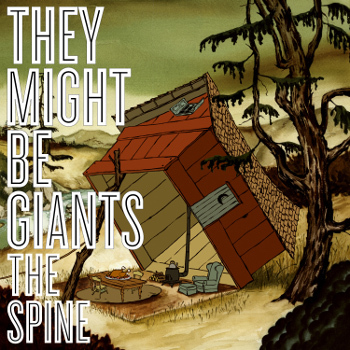 I've been dragging my feet across my back
And I've been rubbing my head against my neck
The color of infinity
Inside an empty glass
I'm squinting my eye and turning off
And on and on and off the light
—Experimental Film
Advertisement:

'The Spine is the ninth studio album by They Might Be Giants, released in July of 2004 alongside a companion EP, The Spine Surfs Alone. It was their first adult album following their foray into children's music with No!, and featured a number of songs that had previously been released on Dial-A-Song or as online demos, or which had exclusively been played live. Most famously, They Might Be Giants collaborated with The Brothers Chaps to do a music video for the opening song "Experimental Film" featuring characters from Homestar Runner.

Gonna Make You Fall In Love With Tropes