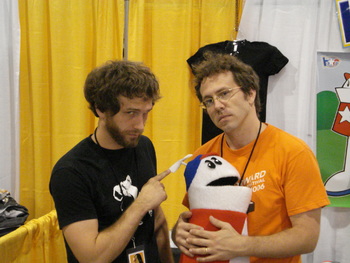 Matt on the left and Mike on the right.
Advertisement:

The Brothers Chaps refers to the sibling duo of Mike Chapman (born September 20th, 1973) and Matt Chapman (born November 1st, 1976), best known for being the duo behind the cult web series Homestar Runner, with Mike doing most of the animating, Matt doing most of the voices, and both doing the writing. They spent most of their time during the 2000s solely doing Homestar work, which eventually got made into a game by Telltale Games in the fall of 2008. Around the time of the birth of Matt's second kid in 2009, they took a bit of a break, with little to no Homestar Runner content until 2014. During that time, however, they had decided to give a try at television, having previously been offered television jobs during their time making Homestar Runner. In 2014, they got back together and went back to making Homestar Runner content semi-regularly.