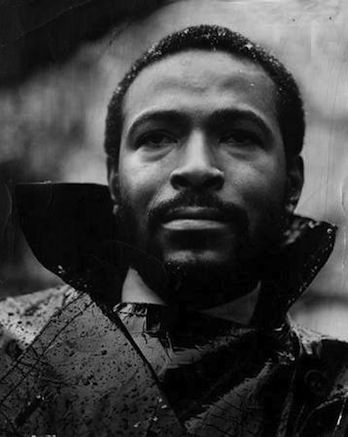 "When Marvin Gaye opened his mouth, the notes that came out... He would put his entire DNA into those notes. There was that much feeling. He was the tone king."
— Seal
Advertisement:

Gaye started out as a member of the doo-wop group the Moonglows and then embarked on an extremely successful solo career on Motown Records. His early hits included "How Sweet It Is (To Be Loved by You)" and "I'll Be Doggone." During the same period, he was writing hits for other Motown groups, such as the Marvelettes' "Beechwood 4-5789" and Martha Reeves & the Vandellas' "Dancing in the Street," and was a session drummer. Marvin's works defined the "Motown Sound," which was a blend of R&B and pop music with orchestral strings.

Gaye frequently sang his hits with various female artists, such as Kim Weston and Mary Wells. His most famous duets were with Tammi Terrell, singing the songs of Nickolas Ashford & Valerie Simpson, who also produced them with a psychedelic sound. The hits like "Ain't No Mountain High Enough" and "Ain't Nothing Like the Real Thing" created the illusion that Gaye and Terrell were lovers (which they weren't). These duets continued until Terrell got a malignant brain tumor in 1968 which killed her two years later. This put Gaye in a depression, refusing to acknowledge the success of his singles and desperately wanting creative control.

Gaye's best-regarded album was What's Going On (1971), released only after a raucous argument over it with Motown head, Berry Gordy, to critical and commercial success note  (pretty much any list of "Greatest Albums in History" you'll ever see will have three albums at or near the top: The Beatles' Sgt. Pepper's Lonely Hearts Club Band, The Beach Boys' Pet Sounds, and What's Going On) that spawned hits such as the title track and "Mercy Mercy Me (The Ecology)." After the album's release, Gaye renegotiated a contract with Motown that allowed him creative control and made him the highest earning African-American musician at the time. Gaye moved to Los Angeles from Detroit in order to score the blaxploitation film Trouble Man; the soundtrack was a hit.

After the socially conscious What's Going On, Gaye switched to sensual songs for his next album Let's Get It On (1973). The album cemented Gaye's reputation as a sex symbol and became the biggest selling album during his lifetime. The title track became his biggest selling single. Gaye slowly moved towards funk with this album and his next few.

In 1978, Gaye's wife, Anna Gordy (the sister of Motown founder Berry Gordy) divorced him, citing irreconcilable differences and seeking money in palimony to support their adopted son. As a result of a deal Gaye's lawyer made, Gaye would give her half the royalties from his next album. He wrote an album in three months but held onto the album that would become Here, My Dear (1978) for a year. At the time of its release, the album was indeed neither critically nor commercially successful, leading to accusations that Gaye released a lackluster album intentionally to make sure his ex-wife would end up with as little money as possible, despite this being against Gaye's best interest. Regardless, the album has since been Vindicated by History, and today is seen as one of his best albums. The following year, Gaye filed for bankruptcy and moved to Hawaii. His next album, In Our Lifetime (1981), was edited and remixed by Motown without Gaye's consent; he terminated his contract with Motown shortly afterward and moved to Belgium.

In 1982, Gaye signed with Columbia Records, which released his comeback album Midnight Love (1982) and the Grammy-winning single "Sexual Healing," which was a change in style to European flavored pop and contemporary R&B. This was then followed up in 1983 with a tour of the US, the pressure of which caused Gaye to descend into chronic cocaine use; Gaye became increasingly paranoid that he would be assassinated, frequently wearing a bulletproof vest when not on stage.

Following the tour's conclusion, Gaye moved back in with his parents to look after his mother, who was recovering from kidney surgery. Old childhood tensions between him and his father ended up flaring up again, and the two would frequently quarrel with one another, reaching a point where Gaye would jump in on arguments between his parents and physically assault his father (who himself was becoming increasingly aggressive and confrontational). Gaye also became increasingly suicidal, and attempted to kill himself by jumping in front of a moving vehicle; he was left with only minor bruises.

Both Gaye's tensions with his father and his suicidal tendencies would reach a breaking point on April 1, 1984: following another confrontation with him, Gaye's father entered his bedroom and shot him with a pistol Gaye had previously given to him as a Christmas present. Frankie, Gaye's brother, was alerted to the shooting, found Gaye, and cradled him in his dying moments; according to Frankie, it was at this point that Gaye revealed that he had intentionally coerced their father into murdering him. Gaye's father would later be given a six-year suspended sentence and five years of probation for the killing (he died in 1998). Thus ended the life of the man whose works ranged from doo-wop to soul and political to sexual, who influenced others to gain creative control and produce themselves, and who made uniquely autobiographical albums.