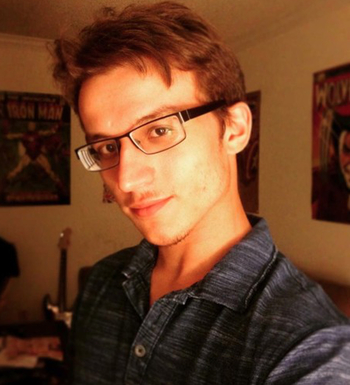 Chris Ray Gun, also known by his real name of Chris Maldonado, is a YouTube comedian, political commentator, and singer/song-writer.

His videos are mostly known for their political commentary, in which he discusses and pokes fun at recent news stories or political-leaning internet content, such as feminist YouTube videos. However, he also has a variety of other content, including music (both original songs and parodies of existing songs), non-political comedy videos, and gaming content.

The channel has a few main series, in addition to the occasional break in the pattern:

Other recurring content includes his "Social Justice the Musical" videos, where he parodies songs to talk about political issues, and his Q&A videos, often involving one of his friends.

His friends are perhaps the most notable recurring theme with this videos; much of the humor revolves around him speaking to his demonic llama-plushie Paul, or bothering his roommates and capturing their reactions on-camera. He is also a frequent collaborator with other popular YouTubers in the same niche as him, with those YouTubers often getting to cameo as the voice of Paul.

The channel can be found here.

He also has a podcast channel, The Snark Tank

Tropes found on the channel: