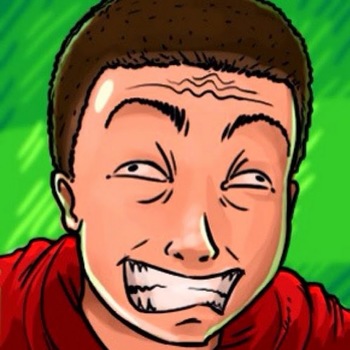 iDubbbzTV is a YouTube channel run by Ian Carter, known for its mix of Take That!, Surreal Humor, Crossing the Line Twice and copious amounts of Squick. Ian is well known for his Content Cop series, where he reviews certain YouTube channels and essentially analyzes and tears them apart in a very thorough and hilarious way.

Besides Content Cop, he also does different shows, including but not limited to:

The channel is also part of the "Shrimpson Boys", a supergroup of YouTube channels that also includes Filthy Frank, MaxMoeFoe, HowToBasic, and Dolan Dark and engages in various oft-dangerous activities on each other's channels.

Probably his most ambitious endeavor, however, is the Creator Clash

. The event was partially inspired by RiceGum challenging Ian to a fight and backing down, and Ian's dissatisfaction with influencer boxing matches (particularly the Kayfabe and unsportsmanlike conduct involved). The event involved real boxing judges and referees, and Ian hired boxing coaches for all of the participating creators. A full vod of the livestream can be found here

You can find his channel right here.

(Warning: Some of his videos are NSFW.)

, and is mainly meant for extra material from the primary channel, though it does also host the Save the Squirrels Initiative series. The second is called iDubbbzgames

and is exactly what it sounds like. Any tropes relating to these channels should be posted here.

iDubbbz as a southern cornhead

iDubbbz eats corn on the cob the southern way and also stops hiding his accent while wearing a country cap backwards.

iDubbbz as a southern cornhead

iDubbbz eats corn on the cob the southern way and also stops hiding his accent while wearing a country cap backwards.