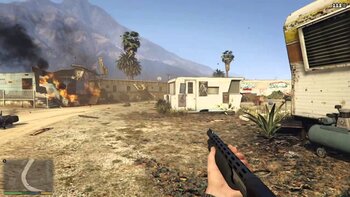 Just a normal day in a (fictional) trailer park.
Advertisement:

A subtrope of Horrible Housing that treats a trailer like the most horrible sort of housing available.

Because of the ubiquity of "Friends" Rent Control in fiction, the quickest way to establish that a character is extremely poor is to have them live in a trailer. In fiction, trailers are only ever inhabited by the poorest characters — and bonus points if they are also loutish or stupid (hence "trailer trash"). If the protagonist themselves is not one, they'll probably live in a trailer with Abusive Parents. In an American work, expect the trailer's inhabitants to exhibit Deep South stereotypes, owing to the association of trailers and mobile homes with the Southern United States. Expect overlap with Pottery Barn Poor, where, in spite of everything, the characters will still have nice clothes and other amenities.

This trope has the distinction of being Truth in Television and not. To some extent, the "trailer trash" stereotype grew out of the "shanty towns" that sprung up during The Great Depression, although they were often tents or shacks. The modern modular/manufactured home, meanwhile, was popularized

by Alabama businessman James Sweet after World War II, and most of them were and still are sold to low-income people as a cheaper alternative to normal houses. It's true that they were often unsanitary, unregulated, poorly built, and generally pretty miserable places to live compared to the alternative, even if regulations since The '70s have cracked down on the worst examples. The "trailer trash" stereotype is now so embedded in modern culture that the mere glance at a trailer home will be used to communicate the poverty and/or misery of a character's situation.

In Europe, this trope also grew out of unpleasant stereotypes about Irish Travellers and Romani people, specifically due to their nomadic lifestyle and criminal reputations. (However, in the modern day, trailer inhabitants will generally not be nomadic.) If they are, it may be a variety of a person who Lives in a Van, but generally not.

The significance of these portrayals is that the trailer itself is the source of much mockery and/or distaste. Trailer Park Tornado Magnet can be one reason why, but in general, the reasons why trailers are disproportionately horrible will usually rely on internal reasons.

This trope will most often apply when the character is the only person who lives in one, with the Big Fancy House as standard. However, it can apply to trailer parks in general if they are portrayed as a Wretched Hive.