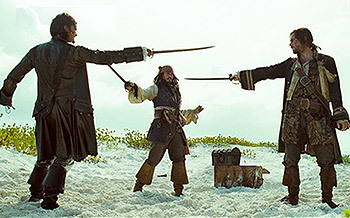 Left to right: A blacksmith, a pirate captain, and a disgraced Naval Commander. Each seeks the chest for his own desires.
Gabe: Well, isn't the enemy of your enemy, like, your friend? Or whatever? Can't they team up?
Tycho: Not exactly. In this setting, the enemy of your enemy is still a floating, greasy, armored brain.
Gabe: Well, what about his enemy? Maybe you could be friends with him.
Tycho: No, because that guy is a mechanical horror in an undying battle shell. He sails from world to world in a flying tomb, serving gods who eat hope.
— Penny Arcade (on Warhammer 40,000), "In the Grim Etcetera"

This is any fight where there are at least three sides involved (i.e. against each other), with no prearranged alliances.

We can be talking individuals or armies, although the version with the individuals is usually more fun since the army one often degenerates fast into a free for all. Often noted by directors and fight coordinators as being very difficult to set up or film properly, although often worth it for the aforementioned fun if they manage to pull it off right.

Almost always begins as a Mexican Standoff as the various sides try to figure out who to shoot or stab or fireball first. Things get particularly fun if you have several guys with a gun in each hand, each trying to keep aim on the other two targets simultaneously. Expect a lot of sweating, twitching, and flicking eyes until the inevitable happens.

This trope calls for no prearranged alliances, because then it's not really three-sided — unless there are so many sides involved that even taking prearranged alliances into account, there are still at least three sides! However, it is fairly common that after a short amount of fighting, two of the sides will accidentally or on purpose end up ganging up on the third, often with an unspoken agreement to finish dealing with each other once the third side is out of the way. As a general rule, at the very least two of the sides will have to be in an Evil Versus Evil scenario and at the very most everyone involved.

Often enough, this alliance will be helped along when the third side assumes that all its foes are on the same side.

Alternatively, if neither side can win the battle on their own, the outcome depends entirely on whom the weakest of the three will ally themselves with, resulting in the Kingmaker Scenario.

As another alternative, a particularly devious side may manipulate the others into Let's You and Him Fight, then go after whoever is left.

In a video game, especially a First-Person Shooter, 99% of the time the three sides will consist of the player and any allies vs. enemy soldiers vs. some sort of mutants/aliens/zombies.

No real relation to Super Smash Bros. Melee, although that trope appears quite prominently in that series as a whole.

Compare Gambit Pileup, which is like this trope but with gambits instead of fights. Can be a result of Colliding Criminal Conspiracies.