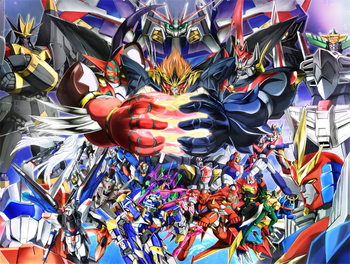 IN A SKY MISTED BY TEARS, A RAY OF LIGHT NOW DESCENDS! THAT SHINING FORM IS THE MESSIAH OF STEEL! THAT OVERFLOWING POWER COMES FROM LOVE AND COURAGE! IT CAN CRUSH ANYTHING, THUNDER!!!

There are warriors who have wings made out of steel...

They are just about to take off for the last battle that determines the fate of the world...

These warriors will never give up, because they've got tenacious and strong hearts, that are filled with great love...

They are ready to sacrifice their own lives to blaze a new trail for the future, for new hopes... and dreams.
— Opening narration to Wings of the Legend
Advertisement:

A long-running, Massive Multiplayer Crossover Turn-Based Strategy video game franchise developed by Banpresto, Super Robot Wars is based on almost every Humongous Mecha series ever made in Japan, such that the franchise was awarded a Guinness World Record in 2021 for "the most intellectual property licenses used in a role-playing videogame series". In Western terms, imagine if The Avengers (both teams of that name), the Justice League, Spider-Man, the Fantastic Four, the X-Men, the Teen Titans, the Doctor (all incarnations), The A-Team, Sherlock Holmes (and all other incarnations), the Ghostbusters (plus both incarnations of the unrelated Filmation team), He-Man, She-Ra (both incarnations), the Scoobies, Mystery Inc., and RoboCop fought alongside G.I. Joe, The Autobots (and all subsequent incarnations), the BPRD, Stargate SG-1, Battlestar Galactica (and the original series), every single Power Rangers team, Matthias and Martin the Warrior, the Pan-Pacific Defense Corps, the crew of the Serenity, the Clans, Starfleet, and the Rebel Alliance all teamed up while injected with industrial levels of weapons-grade Hot Blood. Now imagine an existential threat it would take to bring them all together, and imagine them pounding it flat.

The first Super Robot Wars was released on the Nintendo Game Boy, and featured mecha from Mazinger Z, Gundam (various series) and Getter Robo (referred to as the "Holy Trinity" of the franchise and would star in nearly every game from then on). As the franchise grew, more series were added, as well as their characters. Each game would take the storylines of all the series and merge them into one (mostly) coherent whole. This often required some creative interpretation, particularly in the case of Gundam, as characters, mecha and events that took place decades apart in the original stories now occur within a matter of weeks of each other, if not, simultaneously.

The usual setup for your average Super Robot Wars game is simple: take the story of every Humongous Mecha series included, put it in a blender, and set to "liquefy". The player usually sees the story through the eyes of an original character and their mecha, possibly through different protagonists and different story routes. As the story begins to wind down, an additional threat makes itself known, and the gathered heroes come together to beat the unholy hell out of it. Of course, the interactions can sometimes have an interesting effect on various characters. The Super Robot Wars Alpha games, for example, are highly regarded by many fans for making Shinji Ikari much less of a wuss.

Starting from the second game, entirely new mecha and characters were introduced. These became known as "Banpresto Originals."note The term would become defunct once the developer was absorbed into Bandai Namco Entertainment. In 2002, Banpresto released Super Robot Wars: Original Generation for the Game Boy Advance, which consisted entirely of the original characters and mecha created for the series over the years; a sequel was released in 2005. Both titles, including Spin-Off Endless Frontier, are the only Super Robot Wars games to be officially released outside of Japan, due to the obvious lack of licensing problems. However, by The New '10s, franchise publisher Bandai Namco Entertainment began a new international push via its licensed installments and the realities of modern Internet commerce (see "International Era" folder in recap).

The series is occasionally referred to by English speakers as Super Robot Taisen, the original Japanese name. While some of this usage can be attributed to Japanophilia, the scant few American releases of the series were specifically titled "Super Robot Taisen" to avoid a trademark conflict with the Robot Wars series. (The Irony of using an English translation of a Japanese title while using rōmaji for an English-language title should be noted.) Strangely, "Super Robot Wars" is a Japanese invention: "大戦" (taisen) is the actual term used, and the only bit of Japanese in the title. At some point, "Super Robot Wars" began to be used as an alternate "English-language" title in Japan, akin to "Mobile Suit Gundam" and so on. This title has been used for the English-language Asian releases starting with Moon Dwellers, essentially making it the official English title of the series going forward. Starting with 2017's Super Robot Wars V, English subtitles were included, allowing North American players to finally play the game by importing the PlayStation 4 disc from Asia. The 2021 entry, Super Robot Wars 30, will be the first to have an official North American release on Steam, on October 27, 2021.

Chronological Releases of Super Robot Wars games include the following;

For more information on each game, which series and Original Generation debuted in each game, and how they affected the franchise, please check the Recap sub-page.

The franchise is a Trope Namer for:

Tropes to the franchise as a whole, including how the games are played, are the following:

Given the magnitude and scope of the franchise, pretty much any anime/manga trope can be found in Super Robot Wars sooner or later, due to the fact that it contains so many series. Some that stand out, though, are the following: