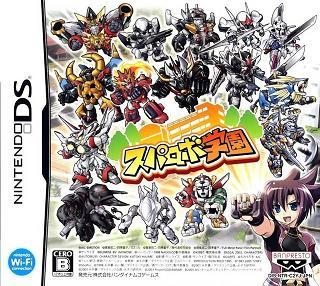 Well, it does feature a school...oh, and Super Robots.
Advertisement:

Players take on the role of Ryoga Saeki (or any name they desire), a fresh transfer student arriving at an Academy of Adventure which teaches future commanders and leaders through the use of a special device called "BASE", which allows them to store the battle data of and simulate combat with various Humongous Mecha. Along the way, players will meet a Cast of Snowflakes, engage in typical high-school hijinks colored by Duels Decide Everything and hopefully have a laugh or two about the numerous parodies and Lampshade Hangings.

Its core aim was an attempt to reintroduce Competitive Multiplayer to the franchise, something Super Robot Wars Link Battler and Super Robot Wars XO had, except Gakuen builds upon new mechanics rather than recycle the same approach from the main series. For all intents and purposes, the experiment can be considered a failure, as this was the last Super Robot Wars installment to truly toy with multiplayer.