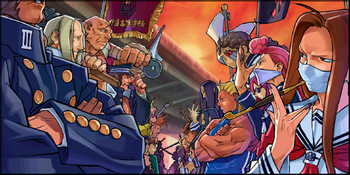 Whether just making a bit of trouble at the back of the classroom or out picking fights, schoolyard bullies or members of one of those oddly-decked-out motorcycle gangs, delinquents are a sure sign that not all is right. Japanese Delinquents comes in two distinct flavors: Throw-away minor characters, and major (or main) characters.

The visual style of the Japanese delinquent in fiction has remained more consistent than in Real Life. note A uniquely detailed description of the fashion and behavior of real yankees and bikers in The '80s can be read in Ikuya Satou's book

. The description below is an up-to-date and relatively realistic one.

For both types, speaking with rolled Rs (to convey a sense of rage) and dyeing their hair in some form is usual (though the likelihood is greatly increased for major characters), with bleached-blond being the most common variety. A ridiculous pompadour or ri-zento/regent

hairstyle that juts out from the forehead like a battering ram is a delinquent hallmark; this is seldom played straight nowadays, especially for main characters.

When first seen a male delinquent character will traditionally be in a distinctive pose: head tilted back and to the side and upper body leaning back with hips thrust out and shoulders hunched forward, with either arms folded or hands in pockets. In more recent works, you'll sometimes instead see the "Slav squat" borrowed from Russian gopniks, a deep crouch with heels touching the ground, body leaning forward, and arms resting on the knees (which is called yankii zuwari or unko zuwari in Japan). Narrowed eyes and an upper lip curled into a sneer typically accompany either pose. In the case of minor antagonists, one of these poses on introduction is practically mandatory.

Other visual identifiers include:

Female delinquents often have their seifuku in some form of purposeful disarray—unknotted scarf, loose socks, partially unbuttoned top, and the skirt either very shortened or very lengthened (the latter being especially popular in the 70s and 80s). A coat or sports jacket, either over the regular jacket or replacing it, also indicates a tough cookie. They will sometimes be portrayed as kogals (who flaunt their disposable income), or some other subculture, or engaging in less violent inappropriate behavior. They'll typically also carry weapons like long rulers and sticks too.

Their behaviour is a general blend of everything you would expect from someone called a delinquent: getting into fights, disturbing the peace, and generally just not getting along with society at large. Their interests, if they have any, tend to be mainly baseball, motorbikes and Professional Wrestling and/or martial arts, due to their penchant for violence and physical fighting, though most of their brawling boils down to Good Old Fisticuffs. If they are trained practitioners themselves, they will be invariably of the Arrogant Kung-Fu Guy type and will harass any fighting character they see as not as tough as them. Villainous examples and mooks are more likely to rely on numbers and weaponry than protagonist delinquents, who often fight unarmed and man-to-man or outnumbered, but even a "good" delinquent tends to fight dirty.

The minor, throw-away type are essentially there to provide trouble for the main cast to clean up. The major character type, on the other hand, carries at least some the above traits, but is almost always a Jerk with a Heart of Gold.

In Japanese, delinquents are referred to, both in real life and in fiction, as yankii (as in "yankee", because of their rebelliousness and Hawaiian-patterned shirts they sometimes wore rather than an affinity with the USA), while their leaders are called banchou. Female leaders can be called sukeban (which has also become associated to all female delinquents, leader or not) or onna banchou. Motorcycle and automobile racers are usually considered a separate subculture of delinquent, known as Bōsōzoku or hashiriya. More recent works may feature color gangs; these guys draw heavy influence from American street gangs, and can be distinguished from the usual riff-raff with their baggy clothing and use of colors as identifiers (jewellery and bandannas are optional).

The Yakuza, Japan's indigenous organized crime syndicates, tend to have little respect for delinquents. In their eyes, Yakuza are professional criminals with a sense of tradition, whereas delinquents are just upstart punks with an attitude. Some very low-ranking yakuza (called "chinpira") do intermingle with the yankii and their close relatives, the bosozoku and hashiriya, mainly because they are a prime method of trafficking illegal substances. Some yankii and bosozoku like to ape yakuza styles, so many civilians are unaware of this hierarchy or see this as a distinction without a difference, lumping all yankii, bosozoku, and hashiriya with hardcore yakuza.

Unlike street gangs, Japanese delinquents tend to focus less on profitable crime (in fiction, at least) and more on delinquency as a lifestyle. Loitering, vandalizing and brawling serve as a pastime as much as an act of rebellion, though shoplifting and shaking down the meek are not unheard of. When conflicts between delinquents occur, they tend either to be unarmed duels over matters of hierarchy or honor, or fullscale rumbles between rival groups. Gang affiliation is typically based on what school you attend, rather than a voluntary enlistment, and turf wars usually break out over toughs from an outsider school showing their faces or making a scene in an arcade or shopping district within a local school's region. Occasionally, resident delinquents may challenge thugs from a rival school for bullying or mugging classmates they would themselves bully or mug, as a matter of pride.

For delinquents in general, including the Western types, see Delinquents, Greaser Delinquents (for the delinquents of The '50s and The '60s), and Lower-Class Lout.