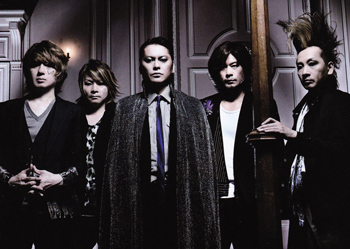 BUCK-TICK is a Japanese rock band from Fujioka, Gunma Prefecture. Though they have never described themselves as such, they are widely regarded as one of the key founders of Visual Kei, alongside bands like X Japan, D'erlanger, and COLOR. They were also contemporaries with many of the artists in those bands and acts - specifically, the singer Atsushi and guitarist/theremin player/programmer/bandleader Imai were somewhat close friends of hide. Formed in 1983, the band stands out amongst their peers for being relatively controversy free throughout their entire run, having had the same line up since 1985 with no break ups, hiatuses, deaths or other such misfortunes befalling them that are so common amongst other bands within Visual Kei, save for band leader and lead guitarist Hisashi Imai getting arrested in 1989 for possession of LSD (Which, compared to some of the stuff other Visual Kei bands were getting up to at the time, is a rather minor infraction indeed). Going on for over 30 years, BUCK-TICK are the longest lasting Visual Kei band in the genre, beating out more well known acts such as X Japan and COLOR and are one of the most respected rock bands in Japan.

Every year, they host one of the few currently existent Visual festivals in Japan - Buck Tick Fest, where bands new and old are invited onstage to cover their songs and perform with them.