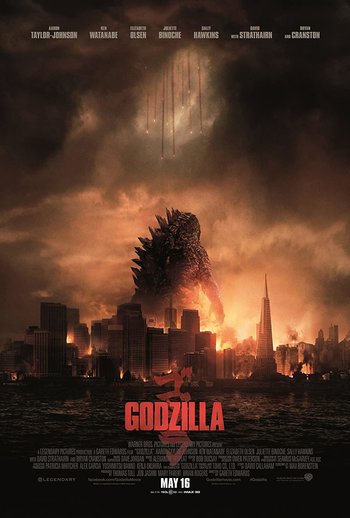 “Nature has an order. A power to restore balance. I believe he is that power.”
"You're not fooling anybody when you say that what happened 15 years ago was a 'natural disaster,' alright? It was not an earthquake, it wasn't a typhoon, okay?... You're lying! Because what's really happening is that you're hiding something out there. [...] And it is going to send us back to the Stone Age! You have no idea what's coming..."
— Joe Brody
Advertisement:

Directed by Gareth Edwards (Monsters), it takes a great deal of inspiration from the original 1954 film over the Camp Toku movies of the late Showa era that most Western audiences are familiar with. The film also shares several similarities with the unused 1994 script for the first American Godzilla movie to a lesser degree.

The story starts off with the opening credits in 1954 where humans accidentally awaken a prehistoric creature that gets sustenance from nuclear energy. To keep the beast from becoming a threat to people, nuclear strikes are directed at it in the Pacific Ocean under the cover of weapons testing, and when that fails to kill it, the creature's existence is concealed from the public.

The narrative picks up in 1999, when the Brody family (no relation), Americans contracted to work at the Janjira nuclear plant in Japan, drop off their son at school and head to work, only to be torn apart when a sudden earthquake causes the plant to collapse. Fifteen years later, Joe Brody convinces his son Ford, now a US Navy lieutenant, to help him investigate the Janjira collapse more closely, which brings them into the middle of a conspiracy involving the organisation known as MONARCH and the rekindling of an ancient conflict between giants that could threaten the safety of the world.

A 72-page graphic novel prequel called Godzilla: Awakening was released on May 7, nine days before the movie itself came out, and a novelization has also been released. App game stores get Godzilla: Smash3, a Match-Three Game with RPG Elements produced by the makers of Godzilla: Destroy All Monsters Melee and its sequels.

Legendary had since decided to expand Godzilla into a trilogy, having announced plans at Comic-Con to incorporate classic Toho characters Mothra, Rodan and King Ghidorah into Godzilla: King of the Monsters, which released in 2019. Furthermore, Legendary confirmed that the prequel film Kong: Skull Island, released at March 10, 2017, is in the same universe as this movie and Godzilla: King of the Monsters lead up to a climactic confrontation in Godzilla vs. Kong. This Cinematic Universe is being called the MonsterVerse. Taking note of the renewed interest in the long-dormant property, Toho followed up on the film's success by initiating a new era of Japanese-made Godzilla movies, starting with the release of Shin Godzilla in July 2016 and continuing with an anime movie trilogy with Polygon Pictures titled Godzilla: Planet of the Monsters Released in November 2017 and May 2018 on Netflix.

Some spoilers below are left unmarked, given that the movie borrows from the formula of other monster movies. Read at your own risk.

"I would not be asking any one of you to add tropes to this page if I did not have complete faith in your ability to succeed. Your courage will never be more needed than it is today."

History shows, again and again,
how nature points out the folly of men.