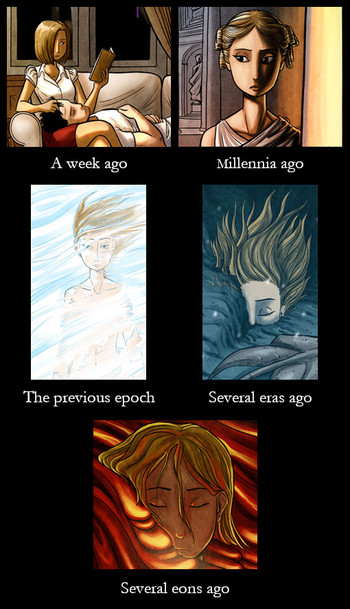 Oh, finally. For her first four billion years, there was nothing to read.
"I was old when the molecules of your world joined and called themselves land and sea and fish and man.
That's why they come back to Z'ha'dum every time they're driven off. Because I'm here. They think they are showing respect. They don't understand. They did use to. But that was a long time ago. A million years."
— Lorien, Babylon 5
Advertisement:

There are the old, and then there are the truly old. People usually die within a century or so. Cities and nations may last a few millennia, and we think them old, but the truly old are so much older. They are even shown to be The Oldest Ones in the Book in some Literature.

They were already old when all the nations we know were born, even those now vanished into history. They can speak of Ancient Athens and Babylon as casually as we might speak of yesterday, for to them those ancient cities are but recent memories. They were there when brick was first laid on brick, over five thousand years ago. They may have watched the trilobites come, and go, with eyes older than the stars. They may even be older than time itself.

Contemplating such immense spans of time is like looking into an abyss, an inducement to vertigo, for they are more than we can grasp. Oh, we can talk about them easily enough, just more big numbers, but we can't intuit them. We all know what a second or a week feels like; a million years (or even ten thousand) is beyond all human experience. It is from this incomprehension that this trope draws its power, when done right, an evocation of incomprehensible age that appeals to our sense of wonder. Naturally, a Time Abyss must experience all the years they claim. It doesn't count if they skip over or sleep through them.

While a Time Abyss is normally a person — perhaps not technically human, but a person nonetheless — objects can also qualify, everything from cities to coins. Imagine an alien monolith that has been sitting on the moon for three billion years. Think about all it has seen; the slow dance of the continents, the long march of evolution, the sudden flowering of civilization. Think, and wonder.

Geographical features can't qualify, though. We expect the hills to be old as dirt. We do not expect people, or any of their works, to be older than the hills.

Five thousand years or so is a decent estimate of the minimum age needed to qualify for this trope, excluding any hypothetical Contemporary Caveman, and yet, in Science Fiction, a Time Abyss will typically be far older than that. Geological time scales are usually involved. In modern-day works of a religious bent (or not), Adam and Eve (or Cain) are likely candidates, as the first ever living sapient creatures. If there are several of these individuals, expect a few of them (or one in particular) to be significantly older than the rest.

A god or major Eldritch Abomination is often a time abyss, as are Precursors and Elves (depending on how they're portrayed, many aren't old enough to follow this trope). These characters may decide that there's Nothing Left to Do but Die because Who Wants to Live Forever?. May even oscillate between Living Forever Is Awesome and bored eternity.

Meta-trope of Living Relic, where the being in question finds themselves the last survivor of their civilization, race, or even species long after their kind has become myth. Being a Time Abyss will often lead to a work's creator wanting to engage in some Exposition of Immortality to show just how much they remember.

Their knowledge is so large that they know literally anything from huge sources as their basic knowledge.

One more interesting fact about them is that they can even be a kind of Ouroboros creature with no beginning and no end that simply lives forever.

Original video at https://youtu.be/Zb5qTdb6LbM -- this version has been heavily cut to fit with the wiki's limitations. With time represented as physical space, every second being one cubic millimeter, very soon we run out of things to compare it to, and even the numbers have trouble catching up. This isn't even the most extreme ends of the scale.

Original video at https://youtu.be/Zb5qTdb6LbM -- this version has been heavily cut to fit with the wiki's limitations. With time represented as physical space, every second being one cubic millimeter, very soon we run out of things to compare it to, and even the numbers have trouble catching up. This isn't even the most extreme ends of the scale.