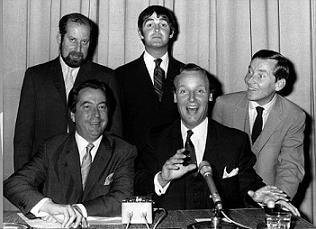 Nicholas Parsons: Reg Shoe, will you begin the next round please, 60 seconds on the subject of "the origins of Just a Minute", starting now.

A British Broadcasting Corporation Radio 4 comedy Panel Game which has been broadcast since 22 December 1967 and was originally hosted by Nicholas Parsons, who appeared in nearly every single episode for 52 years (apart from just two absences for health reasons). It began in the year that Radio 4 launched, and...

Just a Minute is one of the station's longest running programs, with over 800 episodes as of 2013, and it won a Gold Sony Radio Academy Award in 2003. It has been adapted for television thrice; for ITV in 1994, the Beeb in 1999, and that same corporation again in 2012 for the forty-fifth anniversary.

The object of the game is for panelists to talk "for just a minute" on a given (often rather strange) subject, "without hesitation, repetition or deviation" (except they can repeat the subject or any words therein). These rules stemmed from creator Ian Messiter's old teacher, who told him to repeat everything he had just said without hesitating or repeating himself after accusing him of not paying attention to the lesson (Messiter added the rule about deviating personally).

The game comes from attempts to try to keep within these rules, which whilst they appear to be simple, are very hard not to break. To speak for the full minute without being challenged is extremely difficult, and meritorious when achieved (though the most common cause is when the other players agree to ignore any mistakes in order to watch the poor sap struggle for a whole minute [or longer if the moderator is feeling malicious as well]).

(BUZZ)
Nicholas Parsons: That Troper, you've challenged.
That Troper: HESSITATION
Report Siht: How was that hesitation?
That Troper: U WERE SPEKING IN DOUBLE BARCKETS
Report Siht: That was clarifying, and don't type in capital letters!
Nicholas Parsons: Gentlemen, please, let's not argue. As long as he doesn't pause for any length of time, it doesn't count as hesitation. So Report gets another point for an incorrect challenge, he keeps the subject, 20 seconds on Just a Minute, starting now.

Repetition is the most common cause of disqualification, followed by Hesitation, with serious challenges for Deviation quite rare (although it's often used as a "miscellaneous" challenge for tongue-in-cheek comments). On more than one occasion individuals have challenged themselves.

If you don't believe how hard this is then try it for yourself. Talk for one minute about "Bunny Ears Lawyers I have known", without repeating yourself, hesitating, or deviating from the subject in a significant way.

A large number of people have appeared on the show, but there have been five "regular" players over the course of its history: Kenneth Williams, Derek Nimmo, Peter Jones, Clement Freud and Paul Merton...

(BUZZ)
Nicholas Parsons: That Troper has challenged.
That Troper: Deviation, no one cares who played this game anyway!!!!
(audience boos and hisses)
Nicholas Parsons: Oh, That... That Troper, you haven't won any friends in this audience with that challenge! No, I think a history of the panelists is a very important part of Just a Minute, so Trope-tan gets a point for an incorrect challenge, she keeps the subject, there are 2 seconds left to talk about Just a Minute, starting now.

Paul Merton is the only current regular panelist, though others like Tony Hawks and Gyles Brandreth appear often as well...

(whistle blows)
Nicholas Parsons: So Trope-tan was speaking as the whistle went, gained that extra point, and she's moved into the lead with that final display of incredibly fast speaking.
That Troper: i could have done better
Nicholas Parsons: Report Siht, it is your turn to begin the next round, our next topic, "the future of Just a Minute". Will you talk on that subject for sixty seconds as usual, starting now...

The future of the show was unclear following the death of Nicholas Parsons, who had chaired over 900 editions and missed only four episodes over 52 years, in January 2020. (If one includes the various television adaptations over the years, then Parsons hosted just over 1,000 episodes of the programme in total.) Following a year out, it was announced that in February 2021 the show would return with a series of guest hosts including Stephen Fry, Paul Merton and Gyles Brandreth; one of them, Sue Perkins, was later announced as the show's permanent host beginning with the 87th series in September 2021.