Radio / Kevin In The Morning 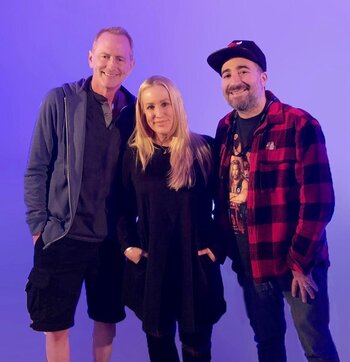 Kevin in the Morning with Allie & Jensen was a morning zoo radio show on the seminal Los Angeles alternative rock station KROQ. It began in 1990 as The Kevin & Bean Show and ran for over 30 years. It is perhaps most notable for launching the careers of Adam Carolla, Jimmy Kimmel and Ralph Garman.

Kevin Ryder
Kevin Ryder, the Kevin in "Kevin in the Morning," is still pretty much a 12 year old in a man's body, with a child-like glee for general mayhem and practical jokes, despite having done 30 years of radio by the side of his former co-host. But with Bean's departure, Kevin has stepped up to be the captain of this radio show still afloat. He still can't be trusted with a bowl of strawberry ice cream, but he's learned how to be an excellent interviewer and how to keep the show on time. In his spare time, Kevin helps his wife run Friends and Helpers - a non-profit org dedicated to helping victims of abuse.
Gene "Bean" Baxter
Gene "Bean" Baxter was the sensitive sophisticate to Kevin's man-child antics, but he also expressed a strange obsession with unusual deaths, a joy for bad puns and arguing over minutia (such as his famous finger-wagging over anyone who refers to "Daylight Savings Time.") He started the whole thing with Kevin in late December of 1989 after having worked with Kevin on radio in the Phoenix area. Before that time, Bean served as a more traditional wacky afternoon DJ at stations along the East Coast during the Eighties.
Allie Mac Kay
Allie Mac Kay is a girl born and raised in L.A.... by a couple of Bostonians, which is why she still is a Patriots fan, despite all the hate she gets for it. Allie served her time in the trenches of morning television news, in markets like Salt Lake City, Sacramento, in and around New York City, capping it with 6 years as a feature reporter for the KTLA Morning News - which is where Kevin and Bean first found her. Several guest appearances and occasional sit-ins for Ralph Garmin on the Showbiz Beat led to her getting hired in 2016 to fill the void left by Lisa May's exit. With Ralph having moved on as well, she now does the What's Happening segments at the end of the hour on the show.
Advertisement:
Jensen Karp
Jensen Karp first popped into the public eye at 19 as a freestyle rapper discovered on Power 106's Role Call under the name Hot Karl - by which he managed to get himself a million dollar record deal on Interscope, releasing songs with Kanye West, Redman, Mya, and will.i.am. (If you're curious, he wrote a book of stories from his life at that time called Kanye West Owes Me $300.) He owns Gallery1988, a Los Angeles art gallery devoted to art inspired by pop culture of the past. His experience writing comedy for stuff like The Late Late Show with James Corden, the Grammys, the ESPYs, the MTV Movie Awards, the Howard Stern Show, and FunnyOrDie as well as several appearances as a guest on Kevin and Bean, led to him joining the show as a co-host in 2018. Oh, and he's also married to Danielle Fishel.

In April of 2019, Bean announced that he was going to leave the show at the end of the year - he planned to move to England with his wife Donna and semi-retire.note  Up until he left, Bean denied it was a retirement - he wanted to move to England because it was something he always wanted to do, and he wasn't getting any younger, but he still planned to try and find radio work in England. Naturally, this led to jokes about how Bean was really dying (#RIPBean) or about how bad his English accent is. note  Seriously, at it's best, it sounded like a bad impression of one of the Beatles. Although he originally intended to go on until the end of the year, the sheer amount of work to sell his houses in the US, move his household's property over to England, and arrange for a new residence in England, required that he leave sooner. He announced in October that his last episode would be on Thursday, November 7th - as the next day, November 8th, would be a Best of Episode, as he and Kevin would be in New York, being inducted into the Radio Hall of Fame. Kevin returned to the show the next week, and continued the show under the Kevin & Bean name for the rest of 2019 with Allie & Jensen as co-hosts. On January 2, 2020, the show was renamed Kevin in the Morning with Allie & Jensen, formally ending the transition.

Sadly, the renamed show did not last very long - on March 18, it was formally announced that Kevin, Allie, Jensen, and all the staff of the show had been summarily fired by Entercom, the current owners of KROQ, the previous day, March 17th. Just prior to the firing, all the employees had been asked to work from home due to the ongoing COVID-19 pandemic affecting the US. The show was temporarily on hiatus while the station figured out how to do broadcasting from home - but it's not known if they were really trying to accomplish this, or if they simply used it as a ruse to get them out of the building before cutting them loose. Kevin was allowed a few minutes on the morning of March 18 to say goodbye on behalf of the show and explain what had happened - and he wasn't above taking a few pot shots at the new management. KROQ announced that Stryker and Klein would be moved up from afternoons to cover mornings on the station.

Over much of its' history, the show produced yearly Christmas albums for charity, consisting of both original comedy bits and songs recorded by bands and artists whose music was played by KROQ. There were sixteen albums from 1990 to 2006.