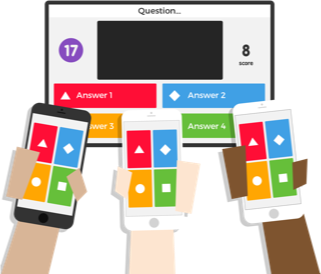 Waiting for tropers... note Naughty content beware! Three clicks on your page and it's off of the wiki.

Kahoot! is an internet quiz game primarily used in classrooms and social settings. It was created in August 2013 in Norway. Users can create, play, and share their own quizzes with their friends.

Kahoot! is typically played on a projector or a large screen in front of a room filled with people. When the game begins, each personnote or team if Team Mode is enabled in the room uses their own device to join the lobby and set their nickname. When everyone is in the game, the host begins the quiz. Each question is timed with multiple-choice answers. The questions and choices are shown on the large screen, and players input their answers on their own devices by clicking on the corresponding shapes. When every player has given their answer, or the time is up, the correct answer is shown along with the amount of players who picked each answer. Players who answer correctly are awarded points, allowing them to travel up the leaderboard and beat other players.

In 2016, a mode was added called Jumble in which players put answers in the correct order rather than select just one answer. There are also the modes Survey and Discussion, which are designed for simply gathering opinions without any actual competition.

Kahoot! can be found here