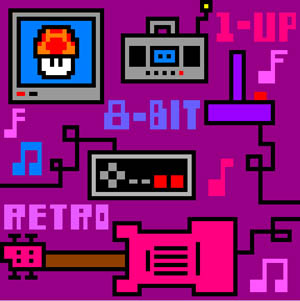 Chiptunes are songs — or song data — usually designed to be played back by a specific sound chip with limited capabilities. The sound is often associated with early Video Game and computer systems, though many early synthesizers also often contain similar (or even the same) sound chips. While the term may apply to old or antiquated hardware, it is not specifically exclusive to game music or old songs. Many have repurposed game hardware, and even the sound chips contained inside, to build inexpensive instruments or synths. Nowadays however, chiptunes are only used by stylistic choice.

So, while some might consider Chiptunes to epitomize the overuse of synthesizers typical of Eighties Synth-Pop, other listeners consider them a way of demonstrating the composer's mastery over a limited electronic instrument, and likewise many of those composers enjoy that challenge. Fans and composers of the genre will be quick to point out that the resulting sound is the entire point of writing such tunes. Like any music played by a computer, Chiptunes are meticulously calculated, and it's probably a combination of this perfectionism with a touch of nostalgia that their fans love.

Chiptune music has had a long-standing relationship with wider Electronic Music. The Trope Maker for chiptune was Yellow Magic Orchestra, a Synth-Pop supergroup who featured three tracks on their debut album in 1978 that recreate jingles and sound effects from popular arcade games of the era with industry-standard synthesizers. YMO leader Haruomi Hosono also supervised the production and release of the first all-chiptune album, a 1984 compilation of Namco tunes aptly titled Video Game Music. Consequently, while chiptune hasn't reached mainstream status off the internet, electronic music has taken heavy influence from the genre over the years. It has reached a point that truly distinguishing between chiptunes and some subgenres of electronic music such as Techno and Glitch is becoming increasingly difficult.

An interesting quirk of Chiptunes is that they come out either sounding awesome or like crap, and there is generally no middle ground. And on the listener side, well, you'll either think it's great, or you'll think it rubbish. On the other hand, though, depending on what kind of listener you are, you may also think it doesn't interest you OR it has one flaw among the other awesome aspects of composition OR the Capcom's monkiers have become too old and such, so decide for yourself!

Another interesting quirk that chiptunes share with General MIDI is that they can be stored in numerous native formats that take up very little space. A full song can be stored in around 10 kilobytes, compared to perhaps 10 megabytes for an MP3 file. This makes them the ultimate in bandwidth friendly music, particularly if you are stuck on dial-up Internet.

A distinct sub-genre is Keygen. Keygen arose out of a simple way to show that someone had devised a program to generate a key for an illegally downloaded program, and the music came as a form of signature. However by its very nature as existing as a bonus rather than a form of music, it's less known, though its influences (namely a much more flowing style and slurred notes) have noticeably seeped into the mainstream chiptune scene.

And lastly, if you have 20 year-old hardware, fear not! By their very nature, chiptunes are designed to be replayed on something old. Even replayers that emulate the sound chips tend to require very little in the way of resources. It should be no surprise, because of this, that Chiptunes (especially in tracker form) have long been a staple of the Demoscene and continue to be so to this day. Thus, a lot of chipmusic is available online for free.

As with most nerdy fandoms, many camps of chiptuners and chiptune fans have emerged:

Notable and/or popular chips used in chiptunes and example systems:

Many Yamaha FM synthesis chips are known for a warmer and/or fuller sound. Tend to be less popular than PSG because of complexity:

Notable artists that are at least somewhat chiptune in nature: