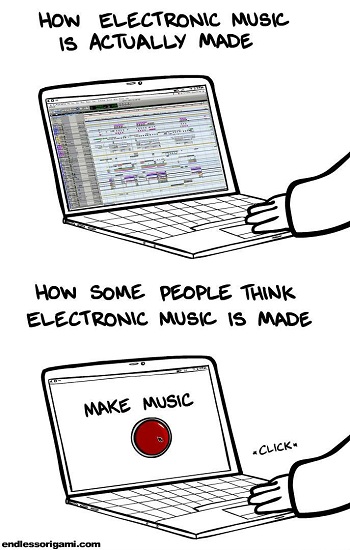 "Computers and electronic music are not the opposite of the warm human music. It's exactly the same."
— Bill Laswell
Advertisement:

Electronic Music is, unsurprisingly enough, music made with electronic instruments, such as synthesizers, samplers and drum machines.

What you use the equipment to make... well that is a very varied thing. Synthesizers and samplers and drum machines are very flexible in the range of sounds they can make, and as such, electronic music is very varied.

You can make pretty much standard pop music with it (often called Synth-Pop), you can make epic and uplifting tunes with it (Trance), you can make the aural equivalent of Mind Rape with it (see Industrial) or you can mix it with many, many other styles (Dubstep, Industrial Metal, etc...). You can even use sample libraries to reproduce the sound of a symphony orchestra; you've probably heard that in major film scores without noticing unless you were listening very closely. Heck, one of the most influential electronic music albums of all time is a set of synthesizer renditions of the music of Johann Sebastian Bach.

Arguably, pure electronic (pop) music can be traced back to Kraftwerk, who made Synth-Pop music that deliberately exploited its synthetic origins. Kraftwerk was one of the first acts, if not the first, that exclusively used electronic instruments (though not exclusively synthesizers) to generate their output. Electronic music itself dates back much further than the 1970s, though; the theremin was invented ca.1920, the "croix sonore" in 1926, the ondes Martenot in 1928, and all of these were written for by avant-garde classical composers like Nikolai Obukhov, Olivier Messiaen, and Joseph Schillinger. (For an example, see Obukhov's The Third and Last Testament, composed in 1946.) The synthesizer itself dates back to 1895 (the Teleharmonium), although modern voltage-controlled synths (along with the name "synthesizer") were first devised by a team at RCA in the 1950s, and didn't enter popular consciousness until Robert Moog left that team to found his own company. In addition to writing for physical instruments that were powered by electricity, as early as the 1920s some composers were making use of 'found sounds' generated by radios, sometimes making longer works largely using collage and even going as far as manipulating them directly (see Dziga Vertov's Enthusiasm! The Dombass Symphony). This technique, reasonably popular among the Italian and Russian Futurists, strongly foreshadowed the later "musique concrete" movement, kicked off by radio engineer Pierre Schaeffer in the late 1940s with works like "Etude aux chemins de fer" (1948), which was created by manipulating the taped sound of a train.

The idea of abandoning physical instruments (and prerecorded sounds) altogether and producing compositions completely synthetically was first proposed in 1949, by Werner Meyer-Eppler in his paper Elektronische Klangerzeugung: Elektronische Musik und Synthetische Sprache. From there, many possibilities of the medium began to be explored and too many developments and trends occurred to be worth describing here. Major figures to watch for in the succeeding years include Edgard Varèse (Deserts, 1954); Karlheinz Stockhausen (too many works to pick one, but see Elektronische Studien I and II, 1954); Iannis Xenakis (Concret PH, 1958; Persepolis, 1971; created a system to translate drawings of shapes into electronic sounds in the late '70s); and there have probably been thousands of other interesting composers writing in the same line. Popular music groups like The Beatles and Kraftwerk were directly influenced by Stockhausen, as he continued to be a huge figure in avant-garde music throughout the 1960s and far beyond.