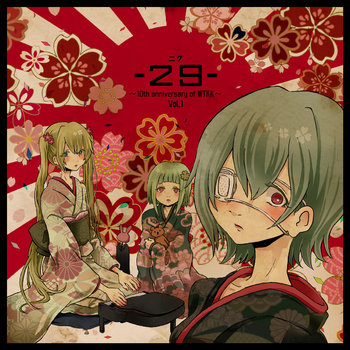 I have something to tell you, please look at these eyes. Please remember me. note  Front: ララ. Back, Left to Right: 鍵盤娘, YOSU, 自称妹.
"My name is Lala.
I am obsolete, and no longer in use.
My name is Lala.
I will sing you a song.
It's a little monotonous,
And I'm not very good with tone or rhythm,
But I will do my best to sing for you.
So please, listen to the end."
— "ららとあそぼ -Lonely Shy Girl-"
Advertisement:

わたしのココ ("Watashi no Koko", approx. "Here Is My" or "Where I Am" in English) is a mysterious, independent and experimental/industrial/ambient/pop-noise/piano ballad virtual band from Japan, combining influences from J-pop, IDM, videogame scores, harsh noise and old-school industrial, with strong emphasis on melodic arrangements and harsh digital noise.

It started in 2007 under the name Kesson Shoujo ("Damaged Girl"), debuting with an album of dark ambient and bleak IDM titled An-Min. A year later, they followed it up with Childhood in Housing Complex, a comparatively upbeat album that marked the beginning of their strong melodic bent. Their signature sound, however, was debuted on Lala Sings, later that year. This EP included vocals from a long-abandoned prototype to the Vocaloids, LalaVoice.

Following the Lala Sings EP, they released a full-length album in that style, titled わたしのココ. The following year, they reworked it, rereleased it, and named themselves after it. This also marks the beginning of the fictional band; singerララ (Lala), keyboard player 鍵盤娘 (Keyboard Girl), 自称妹 (Self-Proclaimed Sister), whose role was never specified,* and no one knows whos sister she is... and YOSU, the producer.

This album expanded remarkably on the EP, to the point of sounding very different from their work as Kesson Shoujo—a Bloodier and Gorier, Darker and Edgier image supported by a much heavier, far more challenging sound. Lyrics, sung from Lala's own perspective, revolved around the feeling of being forgotten, broken, the despair of not being heard, and a longing for death.

After their first album, わたしのココ would go on to release a few compilations and EPs of unreleased tracks, a few of which are hard to come by. By this point, their sound had become gradually more accessible—while they hadn't outright sworn off their influences, they began to place stronger emphasis on production. The result was a more diverse, yet coherent sound, as showcased on their first CD, カラダは正直, the following year's Zombie Magic, and the EPs released around this time. They put out one last compilation in 2014 before disappearing almost entirely off the net.

Two years later, they released hue drone, a loose collection of tracks ranging from instrumentals and sketches to unedited versions of recordings from An-Min. Comparatively few tracks featured the use of LaLaVoice.

2017 marked the project's return, with the 10th Anniversary of WTKK series, four-track EPs of newly-recorded material. The works at once embraced their earliest roots and the know-how they'd acquired in their later years.

Were my feelings able to reach you?