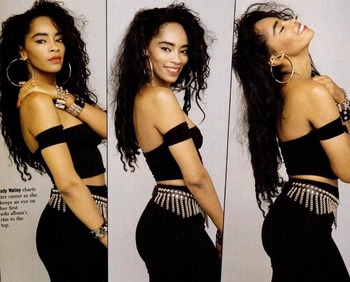 Jody Vanessa Watley (born January 30, 1959) is an American singer, songwriter, record producer, and trendsetting artist in music, video, and style whose music crosses genres including pop, R&B, jazz, dance, and electronic soul. In 1987, she won the Grammy Award for Best New Artist. and has been nominated for three Grammy awards. In 2008, she was the recipient of a Lifetime Achievement Award from Billboard magazine, and was also prominently featured in the historic black issue of Vogue Italia in 2008. Her early music influences are Diana Ross, Marvin Gaye, Stevie Wonder, Michael Jackson, The Jackson 5, The Carpenters, Roberta Flack, Prince, Grace Jones and various jazz artists including Nancy Wilson. In December 2016 Billboard ranked her as the 21st most successful dance artists of all-time. and in 2017 Black Music Honors TV special recognized Watley as Crossover Music Icon Honoree for her groundbreaking achievements and influence.

Watley was born in Chicago, Illinois. Watley made her first stage appearance at 8 years old with family friend and godfather Jackie Wilson. She got her start on the TV dance show Soul Train at the age of 14. Documented by Ebony magazine in 1977 as a part of "The New Generation," Jody Watley was one of the most popular on the show and recognized as a trendsetter for her style and dance moves. As popular stand-outs on the television show, Watley and fellow Soul Train dancer Jeffrey Daniel were selected to join Gary Mumford and become original members of the R&B group Shalamar by show creator Don Cornelius. (Mumford was shortly replaced by Gerald Brown, and Brown himself was soon replaced by Howard Hewett as lead vocalist). The lineup of Hewett, Watley, and Daniel would be the most successful. Watley remained with the group from 1977 to 1983. The trio released several albums and scored several hits including the US Top 20 "Dead Giveaway", and the R&B hits "The Second Time Around", "For The Lover In You", and "A Night To Remember". Because of conflicts within the group, disagreements in direction of Shalamar with Dick Griffey and lack of payment from Solar Records, she eventually left the group in 1983 prior to release of The Look album.

Post-Shalamar, Watley moved to England, and while there she recorded a guest vocal with British Jamaican roots reggae group Musical Youth for their album Different Style. She also recorded with Gary Langan, Anne Dudley and J.J Jeczalik (who later became Art of Noise). She had a brief stint with Phonogram Records where two singles were released (in the UK, Europe and Australia – though crucially not America) under the moniker "Jody" (no second name), "Where the Boys Are" and "Girls Night Out". Also during this era, and after departing the group, she took part in Bob Geldof's Band Aid recording of "Do They Know It's Christmas". After two and a half years in England, Watley returned to America and secured a recording deal with MCA Records, eager to establish her own identity. Her album Jody Watley Made her a house hold name the world over, and put her in the same league as Janet Jackson and Madonna.