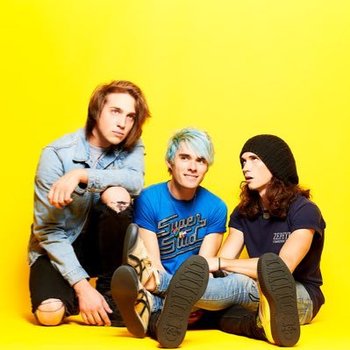 Left to Right: Geoff Wigington (IS A NICE BOY), Awsten Knight (IS A POSER), & Otto Wood (OTTO)
"WATERPARKS IS THE ONLY BAND THAT MATTERS.
BUY OUR ALBUM SO WE CAN GET A COOL PLATINUM RECORD TO HANG ON MY WALL.
SO I CAN EARN MY DAD'S RESPECT.
ALSO SO GEOFF CAN GET A CAR WITH WINDOWS THAT ROLL UP."
— A Waterparks promotional poster from Warped Tour

, letting you know exactly what you're getting into.
Advertisement:

Waterparks are a Pop Punk/Pop Rock band from Houston, Texas formed in 2011, featuring lead singer and guitarist, Awsten Knight, Geoff Wigington on secondary guitar and Otto Wood on drums.note The band is considered to have officially started in 2012, but the band had multiple lineup changes prior to that point; more information on this can be found in the Trivia section

They released two independent EPs, Airplane Conversations and Cluster in 2012 and 2014. They signed to Equal Vision Records in late 2015, releasing the Cluster EP and their first album Double Dare in 2016. Their second album, Entertainment was released in 2018.

After scrapping the previously recorded version of their third album, commonly referred to as Friendly Reminder, Waterparks released FANDOM in 2019, now on Hopeless Records. A month after FANDOM's release, the band released "Entertainment 2019" and "Double Dare 2019", re-imagined and re-recorded mashup tracks of the first two albums in the style of FANDOM. 2020 featured the release of the single "Lowkey as Hell" and the band's first live album/concert film, FANDOM: LIVE IN THE UK. Their fourth album, Greatest Hits (Not a Greatest Hits Album, a regular studio album) was released on May 21, 2021 on 300 Entertainment, a predominantly hip-hop label. 2022 featured their first single on Fueled By Ramen, "Funeral Grey", in the lead up to a new album.

Waterparks are represented by MDDN, the management company owned by Joel and Benji Madden of Good Charlotte. The band is currently signed to Fueled By Ramen.

Musically, Waterparks sets itself apart from similar bands through electronic elements, heavy pop influence, genre experimentation, honest to a fault lyrics, and being surprisingly heavy on certain songs. They also have an uncommonly sharp sense of humor. They often combine playful sarcasm, Comical Overreacting, the occasional pop culture reference, really weird shit, and heavy doses of self-aware meta-humor at the expense of themselves, their fans, and others.

Slow down and list tropes that apply to Waterparks here, jellybean.

Thank you for coming by

,
Today was a really good day.