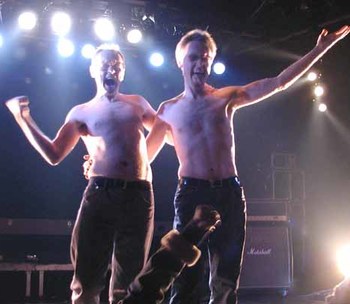 Whitehouse was an electronic music group formed by William Bennett that is seen as the Trope Maker and Trope Namer of what is known as power electronics. The modus operandi as stated by Bennett was "creating a sound that could bludgeon an audience into submission," and indeed, much of their catalog consists of walls of loud, white or pink noise, synthesizers distorted to the extant that they wouldn't generate any notes resembling music, and screamed vocals depicting violence, rape, serial killers, prostitution, Self-Harm, and child abuse. They took their name from the infamous Moral Guardian Mary Whitehouse, as well as a pornographic publication of the same name.

Before Whitehouse, Bennett had a band called Come, which in its brief existence also had Mute Records' Daniel Miller and J.G. Thirlwell as members. Because of these associations as well as collaborations with Nurse with Wound, Whitehouse and the power electronics movement are viewed as early industrial music pioneers.

The most notable members besides Bennett are: Philip Best, who joined at age 14 in '82 and largely stayed until Whitehouse's end in 2008, Kevin Tomkins, a member during the 80s who left to start Sutcliffe Jügend, and Peter Sotos, a controversial writer, to say the very least. After a hiatus from 1985 until 1990, the line-up became Bennett, Sotos, and Best.