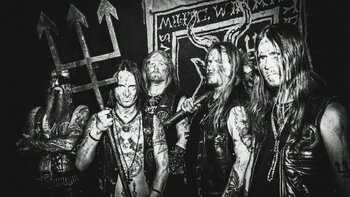 Watain's lineup circa 2022. From left to right: Alvaro Lillo, Erik Danielsson, Pelle Forsberg, E. Forcas, H. Death
Influences:
Yes, I become the serpents chalice
and the power it bestows.
A wisdom that exceeds Death.
Virtues that all laws oppose.
Firmly upheld
amidst the horns aflame.
Man and God,
in fire one and same.
—The Serpent's Chalice
Advertisement:

Formed in Uppsala, Sweden, in 1998, Watain are a Swedish Black Metal band formed in response to the decline of the feared status of the genre. Musically, they share many similarities to Bathory, Mayhem, and Dissection, the latter of whom they are ideologically connected. From the very genesis of the band, they have been the center of much controversy. Besides accusations of being little more than imitators of the aforementioned groups, Watain have made a name for themselves for highly provocative statements, a very devout theistic Satanist outlook on Black Metal, and bloody ritualistic concerts, in which they baptize the audience with pig's blood in the middle of their songs.

They released a DVD in 2012, entitled Opus Diaboli, which — in addition to recording their 13th anniversary show at Münchenbryggeriet in Stockholm — provides some insight into their symbols and the religious aspects of their music. In 2014, they performed a show in Brooklyn, which has been labeled by tabloid media as the "Brooklyn Bloodbath". Their sixth album, Trident Wolf Eclipse, was announced in late 2016, and was released in early 2018. As of 2021, longtime drummer and founding member Håkan Jonsson has officially left the band and was replaced by E. Forcas of Degial, with his fellow Degial bandmate H. Death joining the band as the rhythm guitarist, and live bassist Alvaro Lillo joining the studio lineup. In 2022, they release their seventh album, The Agony and Ecstasy of Watain.